When you book with an account, you will be able to track your payment status, track the confirmation and you can also rate the tour after you finished the tour.
Sign Up
327
Online Excursions > Antalya Cappadocia Tour By Plane

Would you like to visit the fabulous, most amazing place in Turkey that feels like bordering on a parallel reality? Seeing the unearthly beauty of landscapes unparalleled anywhere in the world? You have a unique opportunity to see all of this on a day trip Antalya Cappadocia Tour by Plane.

Cappadocia is a natural wonder that was formed after volcanic eruptions a million years ago. In the VI century BC People began to build dwellings in these rocks. You will be amazed by the cities created in the rocks, a large number of churches and monasteries in caves, stone pillars and mountains of the most unusual shapes and sizes, incredible valleys, intricate picturesque gorges and gorges.
During the most interesting excursion you will visit the ancient cities with amazing history and the enchanting beauty of the valley.

The mysterious region of Cappadocia is truly a vast open-air geological museum.

Imagine – extraterrestrial landscapes, underground caves, giant balloons – Cappadocia will give you a whole range of emotions. What an energy this place has! After all, it is nature that created this exceptional area and, as you know, she is the best artist and she has become as beautiful and mysterious as ever.

This journey will find an answer in your heart and stay in it forever! And amazing photos will mentally bring you back here again and again!

Price List for Cappadocia Tour by Plane from Antalya 2022:

A car will pick you up from your hotel early in the morning around 5:00 am and transfer you to Antalya Airport for your flight to Kayseri, a town close to the main attractions of Cappadocia. Flight time is 1 hour 15 minutes.

Upon arrival, embark on a fun-filled journey through amazing Cappadocia. A very interesting and rich program awaits you. You will visit the most unusual sights of this amazing region:

The Valley of the Pigeons is the most beautiful place in Cappadocia, 4 km long and represents a cluster of rocks with numerous tunnels and nests in the form of windows for pigeons, of which there are thousands. You will see unusual rock faces painted with interesting designs to attract birds.

In the underground city of Derinkuyu, you will be amazed by the caves carved into the soft tuff, creating a very large city consisting of 8 floors and reaching 60 meters deep. It is believed that around 20,000 people could live there. In addition, livestock and various foods were also kept in this city.

Visit Goreme Open Air Park . You will visit the most fantastic city. Imagine Erjias volcano, which became extinct several hundred thousand years ago after ejecting lava, solidified into bizarre shapes. And the malleable mineral rock tuff has made it possible to build houses, churches, monasteries and even hotels for tourists in these rocks – until today.

You will visit the onyx jewelry workshop. In Cappadocia, stones have a special meaning as they were used for construction, decoration and even worship. You will see chic jewelry not only from onyx, but also from precious metals and stones.

After a busy evening stroll, drive to the airport and return to your hotel.

Once you get to the Valley of Love you will understand how otherworldly it is, it is extraordinary and fantastic. Millions of years ago volcanoes raged here, covering rocks and valleys with lava and ash. Unusual mountain formations arose under the influence of natural phenomena. In the Valley of Love, nature depicted them in the form of mighty columns with a top – a cone.

These stone pillars are called peribajalars, which translates to “fairy chimneys.” They are made of soft rock – tuff, in the upper part covered with a harder one – basalt and andesite, but over time the lower part becomes thinner and a kind of phallus appears, therefore this valley is also called erotic by people. The height of the columns averages 20-30 meters, but there are also 40-meter giants. The Valley of Love stretches four kilometers between the cities of Uchisar and Goreme. It is better to visit such a romantic place as this amazing valley with your loved one because the name of the valley speaks for itself.

Uchisar Fortress will amaze you with its splendor. This 60 meter high rock is on the UNESCO World Heritage List. It can be seen from many points in Cappadocia and outwardly looks like a giant anthill.

A rock was formed about ten million years ago during the eruption of three volcanoes at the same time. The ash from volcanoes eventually turned into rock, which turned out to be very convenient for construction, and local people successfully used this, building dwellings and various premises.

Uchisar could hold about two and a half thousand people, so you can imagine the size of this building.

Around the fortress are small rocks, which today serve as hotels and residential buildings for tourists.

From the top of the fortress you have a breathtaking view of the expanses of Cappadocia.

Pigeon Valley is one of the most beautiful places in Cappadocia. It stretched four kilometers between the ancient village of Goreme and Uchisar. The history of this extraordinary place dates back to the turn of the 19th and 20th centuries. Dovecotes were created here due to an acute lack of fertile soil, as pigeons easily provided the best fertilizer for the successful growth of vineyards.

When you visit the Valley of the Pigeons you will see a cluster of rocks with numerous tunnels and nesting windows for the thousands of pigeons that live there.

The unique underground city of Derinkuyu is located 40 kilometers from Goreme National Park, a UNESCO World Heritage Site. It is one of the largest and oldest underground cities in the world. The time of its foundation II-I millennium BC. This city will impress you very much.

The city of Derinkuyu is multi-level, located underground at a depth of 65 meters, on each level there is a huge system of underground passages and labyrinths, which allowed residents to build a life and not depend on the outside surface. There were once living quarters, meeting rooms, schools, halls of spiritual study, churches, storehouses and pantries. The underground city also had its own production – oil extraction, sheep, horses and cows were also kept.

Regarding the safety of the excursion, it should be noted that despite the softness of the rock, there have never been blockages and collapses in the city, which indicates the colossal professionalism of the ancient builders.

The city of Goreme is located in Nevsehir province. The main attraction of the city is the open-air museum.

On the grounds of the museum in Goreme you can see the 9th-century chapels and churches built with beautiful arches and columns decorated in a unique Cappadocian style.

You will also see the monastery and St. Basil’s Church founded in the eleventh century. If you go further, you will see the Church with an Apple, the Church of St. Barbara and the Dark Church.

The last point of your wonderful excursion is a visit to the onyx jewelry workshop. In Cappadocia, stones are treated with special respect because here they were used for construction, worship and decoration. They make very beautiful patterns on onyx using different techniques.

In the workshop you will see not only stone products, but also various and very beautiful jewelry made of gold, silver and precious stones – amethyst, agate and moonstone.

In the evening around 22:00 return to the hotel bringing great impressions and great photos of this unique area.

How much does a trip to Cappadocia from Antalya by plane price?

The price of an excursion to Cappadocia from Antalya by plane for adults, the price is ….. €.

What is included in the cost of Cappadocia Tour from Antalya by Air?

The price of Cappadocia excursion from Antalya by plane includes transfer from your hotel to the airport and back, airfare, professional English-speaking guide, entrance tickets, meals (lunch and dinner), insurance.

How long does it take to visit Cappadocia from Antalya by plane?

The tour to Cappadocia from Antalya by plane takes one day. 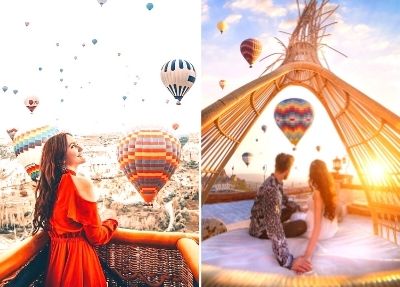 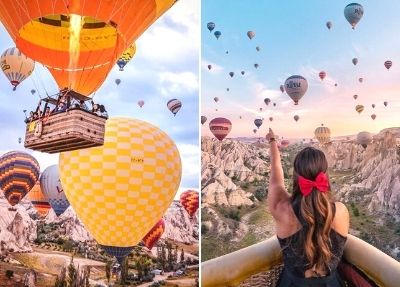