When you book with an account, you will be able to track your payment status, track the confirmation and you can also rate the tour after you finished the tour.
Sign Up
354
Online Excursions > Kemer Cappadocia Hot Air Balloon Tour

Do you love unusual and impressive views, but prefer a comfortable stay? Do you want to take unique photos and videos for your social media pages to impress your friends and followers? Then head to Cappadocia and take to the skies in a big balloon! The magically unique landscape of Cappadocia is like nothing you have ever seen. As the balloon slowly rises at sunrise, you will simply be amazed at the surreal lunar landscape unfolding below. The balloon floats silently and effortlessly through the valleys and over the famous fairy chimneys, vineyards and orchards. The stunning colors of the rock formations will take your breath away. No matter how long you want to stay in Cappadocia, Kemer Cappadocia Hot Air Balloon Tour will be perfect for to to add unforgetable memories to your life!

You will have an unforgettable experience while enjoying the impressive centuries-old formations and ancient settlements that are a UNESCO World Heritage Site. You will see with your own eyes ancient landscapes, places where mankind was born, described in the Bible!

Cappadocia is a magical land with landscapes more reminiscent of Martian landscapes from science fiction movies. You will be amazed by the unusual formations of nature, reminiscent of man-made sculptures. The place is one of the most popular in the Insta world and it’s no surprise. A million people flock to the cosmic landscapes of Cappadocia every year! Finally, there is definitely something to see here. Fabulous “fairy chimneys”, bizarre stone shapes in the form of mushrooms, all kinds of animals, pyramids, peaks, arches and other rock formations can be seen at a glance from a bird’s eye view.

All of this beauty was formed after a series of large earthquakes millions of years ago and the subsequent release of ash and tuff into the air. Long-term exposure to precipitation and wind has resulted in the creation of a special landscape – a system of canyons and bizarre rock formations that you can only contemplate in the only place on planet Earth – in Cappadocia.

And if you’ve been dreaming of taking a steam bath for a long time, then you’ve come to the right place! It will be interesting for you to see from a bird’s eye view the place where several Hollywood films were shot, photos and videos that every self-respecting blogger has.

As you soar above such beautiful views, you will be caressed by a gentle breeze and sunbeams. It will seem to you that you can reach the stone castles with your hand. You can create unique photos and videos that will get thousands of views and likes! You will get a feeling of childlike joy from a dream come true and a feeling of weightlessness as if you are free like a bird in the sky!

Every Day – Call Us for more info

At the agreed time you will be picked up from your hotel in Kemer and taken to Cappadocia. The exact time will be communicated to you one day before the flight. Your flight takes place in the early morning, when vertical air currents are not yet disruptive. That’s why a comfortable, air-conditioned bus will take you to the starting point before sunrise.

Times vary depending on the season. In summer, the flight starts around 5:00 – 6:00 in the morning, in winter – a little later. You will be taken to the launch site chosen by the pilots depending on the wind direction. After flying in a hot air balloon you will receive a certificate which you will celebrate with a glass of sparkling champagne.

After the flight you can visit one of the excursions in Cappadocia or drive back to Kemer.

Hot air balloon rides in Cappadocia are strictly regulated. No aircraft may take off without FAO clearance. Once clearance to fly has been obtained, you will be invited to the balloon. And before you take your seats, experienced pilots will give you a safety briefing. You will be shown what actions to take during takeoff and landing.

Next, team members will help you climb into the basket and take your seats. When the pilot is satisfied that everything is ready, the boat begins to climb gently.

After the briefing and all the preparatory procedures, the ship will slowly begin to rise, it will begin so smoothly that you will not even notice how you are floating above the ground. You can be sure of your safety and positive impressions.

An experienced pilot will confidently parry between rocks, descend and gain altitude during flight. You will soar like a bird, touching the clouds and then descending as close as possible to the bizarre stone caps. With the right direction and strength of wind, the ball can soar to a height of 1000 meters.

Cappadocia is not only beautiful but also a historical country. The earliest mentions of Cappadocia date back to the 6th century BC. These lands were described by the ancient scientist Herodotus , and there are also references in ancient writings. The Bible mentions that representatives of Cappadocia were present in the cathedral where the Holy Spirit descended on the apostles. And in the Cappadocian caves, Byzantine Christians once hid from persecution.

You will see the world-famous Valley of Love, known for its stone phallus columns that reach 40 meters high. You can see the city from above – the Uchisar Fortress, a rocky outcrop with a steep peak, into which many windows and sometimes even entire rooms are cut. Also at the top of the fortress you can see several ancient Byzantine tombs carved into the rock. The area is teeming with abandoned houses and dovecotes carved into the rock. Fantasy Valley will draw your attention because here you can see absolutely everything! Rocks in the shape of different animals, humans, aliens and just something incredible!

Imagine the first rays of the sun rising over the valley, illuminating it with the scarlet colors of passion, the wind gently developing your hair, you, like a real traveler from the novel by Jules Verne, conquering unknown distances and airspace! Hundreds of other spheres of all colors of the rainbow will float around, creating a breathtaking panorama that will take your breath away. You will be amazed by everything that happens because you have never seen more photogenic views!

Your hot air balloon flight takes place in unpredictable wind direction, which is why the landing site is already selected during the flight when the pilot radios the flight path to the crew members. And these, in turn, are already waiting for you in the right place.

After landing, the team will take you to the launch site.

There is a wonderful tradition that accompanies every flight. Upon arrival, the entire team will congratulate you on your flight, you will receive a balloon flight certificate and, as a small compliment, a glass of champagne to celebrate this wonderful event.

After completing your exciting Cappadocia hot air balloon ride, a bus awaits to take you to your hotel. If you wish, you can book an excursion to see the best places to visit in Cappadocia.

How much does a Cappadocia Hot Air Balloon from Kemer cost?

The price of a hot air balloon in Cappadocia from Kemer is 60 euros per person.

How long is Cappadocia Hot Air Balloon Flight from Kemer?

How far is Cappadocia from Kemer?

The driving distance between Cappadocia and Belek is 580 km. The drive from Kemer to Cappadocia takes about 6.5 hours. 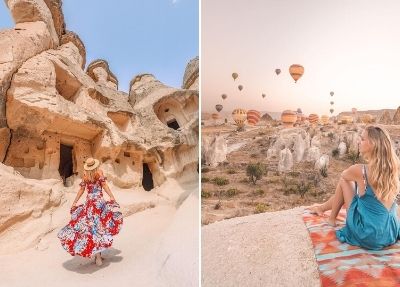 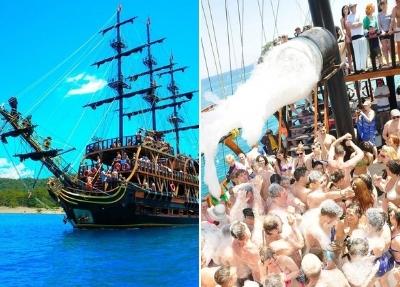