When you book with an account, you will be able to track your payment status, track the confirmation and you can also rate the tour after you finished the tour.
Sign Up
385
Online Excursions > Pamukkale and Ephesus From Side

Pamukkale and Ephesus From Side

Would you like to enjoy the unforgettable beauty of Turkish nature and architecture? Then you should definitely visit Pamukkale and Ephesus from Side because this is the zest for life of this country!

In Pamukkale you will see a complex of 17 hot springs. There is nothing like it anywhere else. It is a snow-white glacial mountain with bowls filled with mineral water. When you come to this place, you are simply fascinated by the beauty of nature.

You’ll wander through the ancient city of Hierapolis, which means “sacred city” in Greek and is steeped in ancient history. You can see the buildings of that time. For example, the necropolis, the largest in Asia Minor, an amphitheater that can accommodate all residents living in the city, the Temple of Apollo, etc.

If you wish, take a dip in the Cleopatra pool, mineral water. They have wonderful healing properties.
You will see Turkey ‘s ancient architecture in Ephesus, the seventh wonder of the world – the Temple of Artemis. Visit sacred sites, namely the House of the Virgin Mary with holy water springs or the Basilica of St. John. You can imagine how people lived back then as many buildings have been reconstructed. Learn the history of these places.

Pamukkale and Ephesus from Side Tour will leave indelible impressions in your memory. You will be filled with renewed vigor and emotions!

Side Pamukkale and Ephesus Tour Price 2022

Price List for Pamukkale and Ephesus Tour from Side 2022

Excursion from Side to Pamukkale and Ephesus

In the morning around 5:00 am you will be picked up from your hotel. The exact time will be communicated to you the day before the excursion. And you will have a fascinating journey through the sights of Turkey. Next a short break for breakfast, which you can take from the hotel in the box or visit the restaurant. And now you are already in Pamukkale, enjoying the beauty of these places and being inspired and amazed by the wonders of nature.

Walk the streets of the ancient city of Hierapolis with a professional guide . Then a hearty lunch awaits you. You have 2 hours to explore the area on your own. You can take incredible pictures of white travertines or take a dip in Cleopatra’s pool.

After the excursion in Pamukkale, drive to Ephesus, where you can have dinner and spend the night in a stone hotel 4 *.

The next morning you have breakfast at the hotel. Take a 2-hour walking tour of the ancient city of Ephesus. Where to visit the Temple of Artemis – the seventh wonder of the world, the House of the Virgin Mary or the Basilica of St. John?

In the evening, around 20:00, just in time for dinner, you will be taken back to your hotel in Side and share your impressions of an unforgettable journey that you will spend this day.

On the first day of your journey you will find yourself in an amazing place that will amaze you with its beauty and uniqueness. Pamukkale is a UNESCO World Heritage Site. You will see the mountain in the form of descending white bowls filled with mineral water. It is called “Cotton Castle” because of its unusual landscape. Although it seems that this is an iceberg with lakes of heavenly color. Travertines, limestone deposits, filled with water rich in calcium, magnesium and hydrocarbons. If you walk along them, you will find yourself in a fairy tale. You definitely won’t see this anywhere else!

Next, visit the ruins of the ancient city of Hierapolis. Walk among the ancient buildings with a professional Russian-speaking guide. This city was part of the Great Roman Empire, was a kind of resort for the aristocracy. You will learn his story. The city was destroyed by earthquakes and rebuilt. The Apostle St. Philip. See the ruins of St. Philip, the Temple of Apollo, the Pagan Temple of Plutonius, the Roman Theater, the Necropolis. The buildings are fairly well preserved. Excavations and restoration work are still being carried out in the city to this day.

During an exciting walk you will have a hearty lunch in a restaurant with traditional Turkish cuisine.

Then you have free time. You can spend these 2 hours at your own discretion. You can come back and walk along the Pamukkale travertines and take beautiful pictures against the backdrop of blue reservoirs. You can swim in the mineral water of Cleopatra’s pool, sit at a lakeside cafe and sip a cup of Turkish coffee, or paraglide into the sky.

You can go into Cleopatra’s mineral water pool to recharge your batteries. Its water helps treat high blood pressure, heart disease, atherosclerosis, etc. There is a legend that Cleopatra herself bathed in it, which helped to preserve her beauty and youth. You will enjoy wonderful sensations while swimming in it. After all, the water in this spring is much lower than the temperature of the human body. Or rather 34-36 degrees. It seems like you are in a whirlpool.

Then drive to the city of Ephesus. It is 190 km from Pamukkale and you can reach the outskirts in about 3 hours. There you will be accommodated in a cozy hotel and a warm dinner.

The second day of the tour begins with a delicious Turkish breakfast. Then take a 2-hour walking tour of ancient Ephesus. The ancient city used to be not only the capital of Asia Minor, but also the spiritual capital. You will plunge into the atmosphere of that time, walking along the street between the old buildings. And you can imagine its former greatness and glory in your imagination. A huge theater carved into Mount Pilon, an incredibly beautiful Library of Celsius, houses of the aristocracy and public houses with replicated interiors.

Ephesus is also known for the Temple of Artemis, the seventh wonder of the world. Previously it was the largest sanctuary of that time, the temple of the goddess of fertility. Its size is striking: around 110 meters long and 55 meters wide. The construction of the temple took over 100 years. Inside were sculptures, paintings, and columns covered in gold and silver. But with the formation of Christianity, it was destroyed. Only one column was restored. You should definitely visit here. Here you can touch a piece of the time when people created 7 wonders of the world, built palaces, huge majestic temples with rich interiors.

House of the Virgin Mary

After walking around the city of Ephesus, you can visit the house where the Virgin Mary spent the last years of her life. This is a small stone house but you will feel it is filled with such spiritual power. The fact that this building was the home of the Virgin Mary was learned from the visions of a German peasant woman named Anna Katerina.

Locals have known this sacred place for a long time. Now this church is a place of pilgrimage for both Christians and Muslims. Nearby is a spring whose water is considered healing. If you have a bottle with you, you should miraculously get water. There is also a wall of wishes. You can tie a ribbon with desire, and on the Feast of the Assumption it will be burned. You will definitely feel the vitality of this place!

You can also find yourself in an amazing place that is full of power.

In the last years of his life, John lived in Ephesus, where he asked to be buried in a cross-shaped tomb on a hill. When it was opened, the body was gone. A basilica was built on the site of the tomb. It had 6 domes, the largest dome was over the tomb of the apostle. Together with the surrounding walls, the territory of the basilica extends 180 m wide (west to east) and 500 m long (north to south). Imagine what a majestic building it was back then. Nature itself speaks of the sanctity of this place. See for yourself – there are so many beautiful flowers. You will see a magnificent picture of the intertwining of the beauty of nature and the ruined ancient basilica.

What is included in the price of an excursion to Pamukkale and Ephesus from Side?

The price for an excursion to Pamukkale and Ephesus from Side includes transfer from your hotel and back, insurance, English-speaking guide, entrance tickets, meals (breakfast, lunch, dinner) and hotel accommodation.

How long is the Pamukkale and Ephesus excursion from Side?

How much is a trip to Pamukkale and Ephesus from Side?

Side Pamukkale and Ephesus Tour Reviews 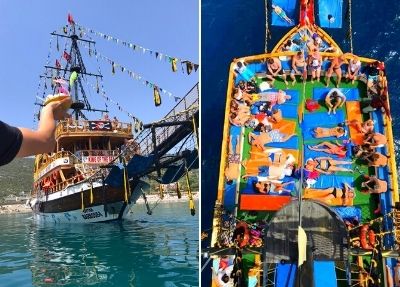 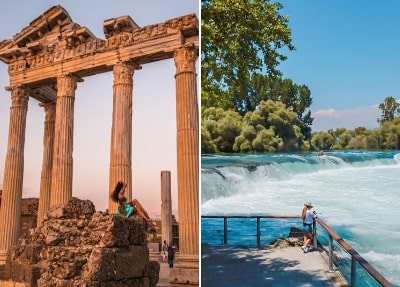