When you book with an account, you will be able to track your payment status, track the confirmation and you can also rate the tour after you finished the tour.
Sign Up
1027

Would you like to visit one of the most picturesque places in the world? Sail along the beautiful river and contemplate the canyon views? Enjoy rafting and swimming in the Emerald? Then Alanya Rafting Tour is for you!

Drive to the Milli Parks Canyon, where you will take a walk along a beautiful green canyon and go rafting on the Köprülü River.

You will be amazed by the incredible beauty of the winding mountain road to the place of rafting, a magnificent green gorge with a bubbling river, picturesque forests and forests. The beauty of virgin nature will bring you minutes of peace and unity with nature, and rafting on the river will bring a drop of adrenaline.

You will have the opportunity to swim in the purest mountain river Koprulu cay. In ancient times, this river was so deep that large merchant and cargo ships passed through it. Now the water of this river is not so deep, but it is still so clear and transparent that you can see fish swimming in it.

Alanya Rafting Tour is a unique combination of sporting passion and tranquility contemplating the extraordinary beauty of Mediterranean nature.

There are 4 different rafting packages you can book:

Would you like to join another excursion in Alanya? Check out Alanya Water Park.

Your journey begins with a comfortable coach that picks you up from your hotel and heads to the scenic Koprulu Canyon. The journey takes approximately 1.5 hours. During the drive you will see beautiful mountain landscapes and fields in the valleys. Rafting takes place in the Köprülü Gorge along the Kökaufay Mountains on a safe and comfortable raft.

On the Alanya Rafting Tour everything is thought for your safety. Raft on a safe raft on the river. You will be provided with a helmet and life jacket. An experienced teacher will give you instructions in Russian and English. During the briefing you will learn how to behave properly on the raft and on the water.

As you travel along the river, you will sail through the infinite beauty of the canyon with its unique nature. Along the way you will find several stops where you can take indescribable beauty photos against the background of the canyon nature, swim in the full-flowing river Köprülü and admire the Oluk Stone Bridge – a monument of the ancient culture. After an active day on the swirling river, a delicious and hearty lunch awaits.

The Milli Parks Canyon Koprulu National Park was established in 1973. It covers a huge area – 366 square kilometers. Countless representatives of the animal world – flora and fauna – are concentrated here. There are up to 600 different plant species. The most popular of them are eucalyptus, fir, juniper, cypress. Deer, wolves, rabbits, foxes and mountain goats live in the park. Associated with them are the giant tortoises Caretta Caretta, which can reach lengths of up to 1.5 meters and weigh up to 90 kg. And how many birds are there here? There are more than 100 types of them.

Koprulu Canyon, located in the Koprulu Milli Parki Canyon, is a natural canyon formed by the bubbling streams of the Kopruçay River. Köprülü Canyon means “Canyon with Bridge”. Its depth is over 100 meters and its length is about 14 kilometers. Turquoise bubbling river water streams invite adventure, and pleasant coolness helps to hide from the heat. Here you can not only ride a raft, but also enjoy the beauty of this corner of nature, breathe in the smell of herbs and hear the chirping of birds.

Many people who have visited the Köprülü Gorge come back here once again. After all, you will surely want to feel the feelings you will experience here again.

The Köprülü Gorge is formed by the Köprüçay River. The length of the river is 183 kilometers. The river rises in the mountains of Eastern Taurus and flows into the Mediterranean Sea. Translated from Turkish it means “river with bridges”.

During the Roman Empire, the river was called Eurymedon. It was very deep. On it, large merchant and cargo ships moved freely like a waterway. The Kopryuchay River is a mountain river, so the water in it is very clean. And on its slopes magnificent views of the mountains open.

On this navigable river was the old port city of Aspendos. Aspendos is a Greco-Roman city founded after the Trojan War. This city, like many ancient cities of Turkey, has been perfectly preserved due to the favorable weather conditions here. The amount of water in the river varies with the season.

The Kopruchay River is an excellent, uncomplicated rafting trail. The rapids belong to the 1st and 2nd level of difficulty, suitable for sports enthusiasts and even for children.

You have to raft 14 kilometers down this charming river. Travel time is approximately 2.5-3.5 hours. During this time, you will have time to fully enjoy the cool, clear waters of the Kopruchay River, admire the mountain beauties, breathe in the mountain and forest air, and also get some of the adrenaline passing small rapids in a safe and modern way Raft.

The Oluk Bridge spans the main channel of the Kopruchay River. This is an ancient bridge built by the Romans in the 2nd century AD, but has been reconstructed already in our time. This is a grandiose structure. It is 27 meters high, 14 meters long and 3.5 meters wide, and it is still operational. Oluk is an incredibly beautiful arch bridge. The view of the canyon will simply take your breath away. Imagine standing on a high bridge, 27 meters above the bubbling river with emerald waters, breathing in the fresh forest scent and birds soaring overhead. Is it really fascinating? You have a great opportunity to take photos.

Not far from Oluk is another original stone bridge that has retained its original beauty. Just like Oluk, it was built by the Romans. The masonry has been preserved since construction. It spread over a small tributary of the Kopruchay.

Rafting is a kind of active recreation on the water, rafting down the river. During rafting you will have an opportunity not only to feel sports excitement, but also to get satisfaction from contemplating the surrounding nature. The raft has an oval shape, inflatable cans are used as seats, which are very comfortable to sit on. The seats have special attachments that make traveling along the river absolutely safe for tourists.

The rapids are divided into 6 levels of difficulty. For amateurs, the level of difficulty should not exceed 3-4. The rapids on the Kopryuchay River have 1-2 degrees of difficulty, which indicates that they are easy to pass even for children. The length of the river route is 14 kilometers, the passage time is about 2.5-3.5 hours.
Rafting in Alanya will bring you a sea of ​​adrenaline, incredible fun and a lot of unforgettable impressions.

Your fascinating raft trip through the picturesque nature lasts from morning to evening. After rafting down the river, you will have a hearty lunch at a restaurant prepared by Turkish chefs. The menu features a buffet table, a main course (chicken, rice, spaghetti) and fresh vegetable salad.

Does the price of rafting tour in Alanya include the services of a English speaking guide?

Yes. The cost of the excursion includes the services of an English-speaking guide who will accompany you throughout the tour.

What do you need to take with you on white water rafting tour from Alanya?

How long is White Water Rafting Tour from Alanya?

Can I go rafting in Alanya if I can't swim?

Yes! You can do white water rafting in Alanya without strong swimming skills.

What days is the rafting tour in Alanya?

The rafting tour in Alanya is made daily.

How much is rafting tour in Alanya?

There are 4 different rafting packages you can book:

Is rafting in Alanya safe?

You have a small chance of being injured on a rafting trip, about 1 in 558 and a 1 in 100,000 chance of fatally dying. This means that for the vast majority of people, rafting is just a fun adventure. 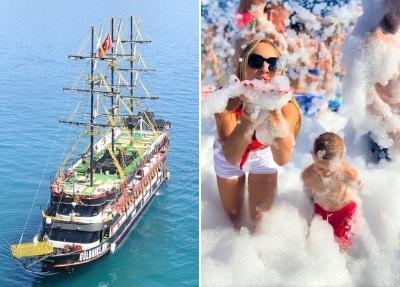 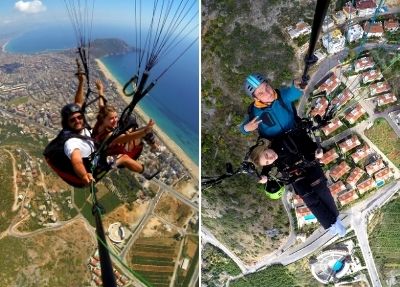