When you book with an account, you will be able to track your payment status, track the confirmation and you can also rate the tour after you finished the tour.
Sign Up
364

Excursion to Salda Lake and Pamukkale from Marmaris

Would you like to see the unique Salda Lake, whose landscape resembles the Maldives? Walk through the snow-white travertines of Pamukkale and its hot thermal springs and immerse yourself in the atmosphere of antiquity on the streets of the ancient city of Hierapolis? A trip to Salda Lake and Pamukkale from Marmaris gives you the chance to admire the unique wonders of nature and swim in pristine clear turquoise waters!

You have a great opportunity to visit incredible places inscribed in the UNESCO World Heritage List. Accordingly, the Salda Lake and Pamukkale Hot Springs are natural phenomena of outstanding beauty and aesthetic importance. And the ancient city of Hierapolis is an important historical landmark.

Enjoy breathtaking nature and admire its ability to create unreal beauty: waterfalls of mineral water formed the whimsical white cascades of Pamukkale. Walk through the snow-white terraces like in the clouds.

You will have the opportunity to swim in the famous Cleopatra Pool, filled with mineral water from thermal springs. The water is loaded with many minerals that are extremely beneficial to your body. Bathing in these waters will relieve fatigue and, according to legend, make you look younger.

When you visit Hierapolis, you will feel the atmosphere of antiquity. The ruins have retained their power to this day. Walk through the old streets and touch the centuries-old history. Marvel at the grandeur of the ancient structures that have survived. You will see one of the largest theaters in Turkey with a capacity of 12,000 people. It is very well preserved to this day and work on its reconstruction continues to this day.

Don’t miss the opportunity to visit “Turkish Maldives” at Salda Lake – white sand, clear water, picturesque nature. Here near the corner of paradise healing clay baths can be taken. On the shores of Turkey’s deepest lake, you can find activities to your liking: serene nature creation, swimming in the sweet waters of Lake Salda, or paragliding and enjoying the breathtaking bird’s-eye view.

Get many unforgettable impressions in one day! On this tour you will rest your body and soul! A trip from Marmaris to Salda Lake and Pamukkale is the perfect solution for your vacation.

Your amazing journey begins at 5:30am when a comfortable, air-conditioned minibus will pick you up at the hotel and you’ll be on your way. Along the way, stop for a delicious Turkish breakfast. Around 10:00 AM you will be near Salda Lake National Park. In the ” Turkish Maldives” you have 1.5 hours of free time. Then drive to Pamukkale ‘s “Cotton Castle” .

A professional English-speaking guide will be happy to take you on a one-hour walk through the ancient cities of Hierapolis and Pamukkale and tell you in detail about life in these days. Then go to lunch and have free time to spend for your own pleasure: walk along travertines and take bright photos, dive into Cleopatra’s pool or sit in a cafe with a cup of fragrant Turkish coffee. After gathering all tour participants, return to Marimaris. You will arrive at your hotel at 7:30 p.m.

After a nutritious Turkish breakfast, arrive at the deepest lake in Turkey – Lake Salda. Its depth reaches 184 meters and it was formed millions of years ago by the movements of tectonic plates. Many fish and ancient stromatolite algae live in the depths of the lake. And the whole area surrounding the lake is a national nature park that is home to many species of birds, animals, insects and reptiles.

For the charming blue color of the water and for the snow-white color of the coast, this place is called “Turkish Maldives”. The surface of the lake and the shore is covered with the mineral hydromagnesite, which looks like fine sand. It was the similarity of the rock elements of Lake Salda and the Maldives that made them similar. It is noteworthy that the same mineral elements have also been found on Mars.

Near the shore of the lake there are reservoirs with healing mineral clay that do not have a specific smell. You can apply this magnesium tone to your skin for incredible refreshment on a hot day.

And if you have the courage, you can take a paragliding look at the landscapes of the natural park.

Then drive to a unique place included in the UNESCO World Heritage List. Over the centuries, hot calcium thermal springs have formed travertine terraces resembling a snow-white castle in the air. Translated from Turkish, Pamukkale means “cotton castle”.

Fantastic aerial panoramas open in front of you like cotton hills and incredibly blue water in travertine pools. You can walk on the terraces, swim in warm mineral water and take great photos.

Accompanied by a professional Russian-speaking guide, visit the ruins of the ancient city of Hierapolis, the first buildings of which date back to the 2nd millennium BC. Several earthquakes destroyed the city, but it was rebuilt. The city flourished and was the main thermal spa for the nobility of the rich.

The extreme earthquake in Thrace devastated and destroyed the city. Throughout its history it has been controlled by Rome, Byzantium and Turkey, which undoubtedly influenced the architecture of the buildings. You can see the ruins of the Temple of Apollo, the Roman theater, a huge necropolis that will indelibly impress you with the preserved tombs and crypts.

You enter the city on cobbled ancient streets through the famous Domitian Gate, built in the 1st century. You can see the preserved walls and columns of residential buildings, fountains, temples and aqueduct arches.

During a fascinating walk through the Pamukkale area, a hearty lunch awaits you at a traditional Turkish restaurant. After lunch you have free time. You can return to the travertine pools of Pamukkale for vivid photos, spend time in the Cleopatra mineral pool, and once again stroll the streets of ancient Hierapolis.

You will have the opportunity to dive into the famous Cleopatra Pool and draw strength from there. According to legend, Cleopatra herself drew her beauty and youth from the waters. This place was once a Roman bath. And this natural pool of warm mineral water was formed as a result of an earthquake and faults in the earth’s crust.

These hot springs were popular throughout the Roman Empire for good reason. The water here has a constant temperature of 36 ° C, and the mineral composition is very saturated, thanks to which the font has healing properties. The amazing nature and the old columns in the pool create an indescribable atmosphere of antiquity. At the same time, the advantages of civilization are also here: there are showers and storage rooms on the territory of the complex. As well as a cozy cafe where you can have a cup of Turkish coffee.

After an exciting day in beautiful places created by nature and man, return to Marmaris. And already at 7:30 p.m. you will be at your hotel.

What is included in the price of Salda Lake and Pamukkale Excursion from Marmaris?

How much does a trip to Salda Lake and Pamukkale from Marmaris cost?

How long does a trip from Marmaris to Salda Lake and Pamukkale take?

The excursion from Marmaris to Salda Lake and Pamukkale lasts from 04:30 to 20:00. The total tour time is approximately 14 hours. 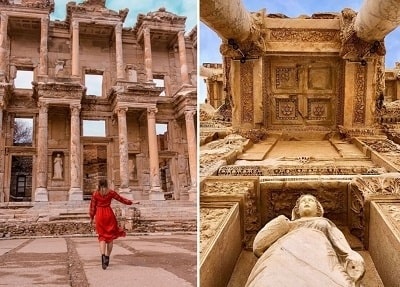 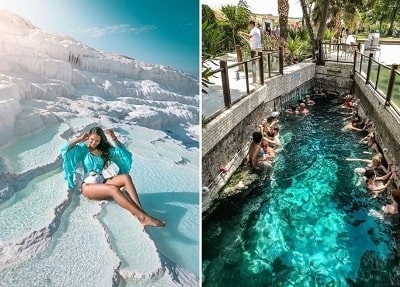