When you book with an account, you will be able to track your payment status, track the confirmation and you can also rate the tour after you finished the tour.
Sign Up
331
Online Excursions > Side Manavgat Aspendos Tour

Would you like to see the ancient side of Turkey, touch the oldest historical sites and visit the famous waterfall in one day? Side Manavgat Aspendos Tour will diversify your vacation with new impressions.

Everyone knows that you can look at the water endlessly. She always attracts our eyes. Likewise, Manavgat Waterfall attracts thousands of tourists for its calm, gentle and unusual appearance. The artificial waterfall is located only 7 km from Side and was built for hydrotechnical purposes. The beautiful and tranquil waterfall is the pride of the locals that its image has been printed on the banknote.

After a series of photos of the river and the beautiful waterfall, drive to the ancient city of Aspendos. Walking the streets you will imagine how one generation was replaced by another. Over the years, traditions, religions and outlines of landscapes have changed. In a few hours you will fool time and traverse thousands of years in your imagination. And the ancient ruins of buildings, an aqueduct and a necropolis will certainly help you in this.
After Aspendos, drive to the old part of Side, which will amaze you with its thousand-year-old artefacts. High gates, towers, an amphitheater without which it is impossible to imagine the life of an old man, and the majestic columns of the Temple of Apollo will surprise you with their excellent condition.

Side Manavgat Aspendos Tour will give you a lot of new interesting knowledge about ancient life, history and architecture. Accompanied by our tour guide, you will definitely enjoy the journey through time. You will take home many impressions, beautiful photos and new thoughts to think about.

Day tour Manavgat Aspendos from Side

After breakfast at the hotel, a comfortable bus will pick you up around 9:30 am and take you back in time to a meeting. The first stop is Manavgat Waterfall crossing Turkey’s most famous river. With the waterfall and coastal scenery in the background, you will take many stunning photos and videos.

Comfortable shoes, sunglasses, and hats come in handy during your trip. So be sure to take them with you.

After the waterfall you will drive to the town of Aspendos where you will have the opportunity to walk through the old streets and see the charming old architecture. The local restaurant serves delicious and hearty national cuisine amidst beautiful views.

After lunch, return to Side to see the old part. Here you will find ancient ruins, the magnificent Temple of Apollo and other local attractions. In the evening at 6pm you will be taken back to your hotel by the same comfortable transport.

The Manavgat waterfall, built to support the reservoir, crosses the mountain river of the same name. It is built in the form of a small threshold 2 meters high and 40 meters long. His looks are so charming that it ended up on a local banknote, which unfortunately has already been withdrawn.

A wavy waterfall falling in a clean white streak looks like tulle ruffles on a riverbank. The aesthetic appearance of the waterfall attracts many tourists from all over the region. Observation decks are equipped on both sides of the river for a beautiful view and wonderful photos.

It is surprising that Manavgat is completely invisible during high tide, merging with the river itself. After a while, he reappears, delighting everyone with his bubbling stream falling into the emerald waters. You will definitely enjoy the stunning and scenic Manavgat Waterfall and its surroundings.

The ancient city of Aspendos was founded in the 10th century BC. from the Greeks . It was conquered by the Persians and Alexander the Great, and in the II-III centuries, already in our time, the Romans came, during which the city gained the greatest prosperity. There was a brisk trade in various popular goods and salt was mined nearby. Interestingly, the city minted its own silver coin.

After the Arab raids, the city gradually fell into disrepair, and after the Salyuk conquest, it soon became completely empty. Today you can see beautifully preserved parts of buildings and structures from antiquity. The huge amphitheater retained its beauty and, moreover, faithfully served until 2008, delighting its viewers with various performances.

In addition to the amphitheater, you can see the remains of the market place where people from all over the region gathered, Roman aqueducts that supplied water to the city, parts of the walls of the basilica, the acropolis and much more.

Walking through the ancient rocky streets, you can get in touch with history and vividly imagine in your imagination how the Polis was arranged long before our existence.

After a hard day outdoors you will surely want to eat. In a cozy restaurant you will be offered a delicious and hearty lunch, prepared according to national recipes. Fine grilled chicken or fish, rice and fresh seasonal vegetable salad, Turkish coffee or tea give you new strength to continue the excursion.

In the old part of the city of Side, a part of the city from ancient times has been preserved. Tourists from all over the region like to visit. Your guide will lead you through the streets and tell you about the thousand-year history of the city.

The ruins of ancient buildings are presented in very different ways. Here you can see the defensive walls up to 10 meters high, towers, a well and an arched gate that have stood strong for many centuries. Agora Square, where citizens gathered on important issues, an aqueduct that supplied water to the city, the Temple of Dionysus and other buildings that have survived to this day.

Separately, it is worth mentioning the theater, which consists of three parts: for spectators, musicians and the stage itself. The theater gave bright performances, comedy and gladiator fights. Visible from the shore, the tall pillars of the Temple of Apollo are the hallmark of the city.

A walk through ancient Turkey will immerse you in antiquity. You can see the remains of ancient cities with your own eyes and touch the most important artifacts of human history.

You will love the serene and beautiful Manavgat waterfall, Aspendos ruins and Side. You will take back new knowledge and a thousand interesting photos as a souvenir. After the tour, your coach will conveniently drop you off at your hotel door.

How much is the day tour to Manavgat Aspendos from Side?

Where to book a day tour to Manavgat Aspendos from Side?

You can book Manavgat Aspendos day tour from Side online with us. No deposits are required with your reservation.

How long is the tour from Side to Manavgat Aspendos?

The tour to Manavgat Aspendos from Side is from 9:30 AM to 6:00 PM. Total tour time is approximately 8.5 hours. 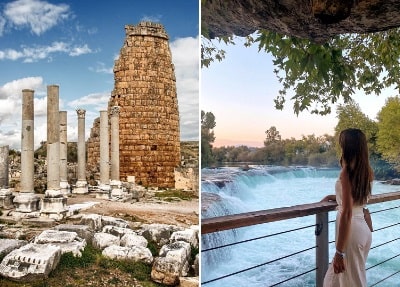 Perge Aspendos Tour From Side 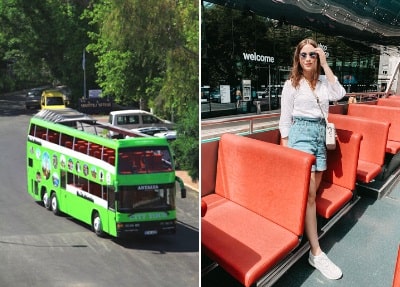