When you book with an account, you will be able to track your payment status, track the confirmation and you can also rate the tour after you finished the tour.
Sign Up
690

Would you like to visit one of the unique places in Turkey? See the eighth wonder of the world and swim in Cleopatra’s pool? A day trip to Side Pamukkale Tour gives you such an opportunity.

You will be mesmerized by the snow-white thermal springs of Pamukkale, which is on the UNESCO list and considered the pearl of Turkey. You will learn the history of this snow-white pool complex with turquoise water and will not be able to resist the urge to dive into it. You can walk through these unique baths and take amazing photos of this stunning natural creation.

Afterwards you will see the ruins of the ancient city of Hierapolis with an amphitheater, cobbled streets, fountains and arches that will take your breath away. And the legend told by a professional guide about the apostles Philip and Bartholomew will take you back to ancient times. Then you will meet Cleopatra’s medicinal pool, whose water strengthens health and improves well-being in various diseases. You can enjoy every minute in this mineral pool. And you can swim in it all year round, since the water temperature is +36 degrees, regardless of the season.

Side Pamukkale Tour will give you a lot of vivid impressions, a lot of beautiful photos, and also heal your body.

Day trip from Side to Pamukkale

Your journey begins at 03:45 AM when a comfortable, air-conditioned vehicle picks you up from your hotel. Upon previous request, your hotel will prepare a box with breakfast for you. You will see a unique thermal spring with snow-white calcium travertines, which will amaze you with its unusual appearance.

Then go to the ruins of the ancient city of Hierapolis, the sights of which have survived to this day. You will be amazed at the size of the beautiful amphitheater, one of the largest surviving theaters from antiquity.

Afterward, you have the option to swim in Cleopatra’s pool, sip aromatic coffee at the poolside cafe, or return to the travertines. At the end of the excursion you will have a hearty lunch. You will arrive back at your hotel around 11:45 p.m.

You will see a magnificently beautiful place, considered the eighth wonder of the world. Pamukkale literally means “cotton castle”. This is an amazing complex of snow-white travertine baths filled with turquoise thermal water. Travertines have turned snow-white in color due to the composition of the water that has been flowing down the hills for centuries. It is a visiting card of Turkey and is protected by UNESCO.

You can walk through these unique natural baths, admire the beautiful scenery and take beautiful photos. You will have the opportunity to see 17 geothermal springs with water temperatures between 35 and 100 °C. During the excursion the guide will tell you many interesting facts about Pamukkale and this unique area.

The next stop on your excursion are the ruins of the ancient ancient city of Hierapolis , which dates back to the 11th century BC. It was named after the wife of the legendary founder of Pergamum – Telefos (son of Hercules and Avgi), Queen of the Amazons, Hiera. In ancient times, the noble Romans liked to rest here. You will be amazed at the preserved ruins of baths, temples and other buildings.

Walking through the ancient streets you will see the Fountain of Triton, Pluto’s Cave, ancient Roman baths and gates, the marketplace of Hierapolis, as well as the ruins of the Temple of Apollo. Before your eyes appears the largest ancient necropolis of Asia Minor with more than two thousand tombstones and the ruins of the Basilica of St. Philip, built on the site of the death of one of the 12 apostles. You will be amazed by the size of the ancient amphitheater with a capacity of 12,000 spectators.

After walking around ancient Hierapolis, you will have many fond memories that will stay with you for many years to come.

In the center of the ancient city of Hierapolis there is a medicinal pool with mineral water that was created during the earthquake on the site of the Roman baths. This spring got its name in honor of the Egyptian queen Cleopatra, who, according to legend, often came and bathed in it to preserve youth and health. The water is rich in various minerals and helps with chronic gastritis and bronchitis, various skin diseases, diseases of the cardiovascular system, respiratory tract and bone diseases.

Regardless of the season, the water has a constant temperature of +36 degrees, so you can swim in it all year round. When you swim in warm mineral water, you will feel small bubbles of radon and hydrogen sulfide carbon dioxide hiss and burst like in champagne. After such a procedure you will feel several years younger.

You have two hours of free time. You have the option to have a cup of strong Turkish tea or aromatic Turkish coffee in a small cafe next to Cleopatra’s pool, walk around or return to the amazing terraces of Pamukkale.

After a busy day, a delicious and hearty lunch awaits you, presented in the form of a buffet. It includes main courses, salads, appetizers and also dessert.

At the end of your amazing excursion, you will return to your hotel in a comfortable coach at around 11:45 PM.

How much is the Side Pamukkale Tour?

How long is a trip to Water Planet Water Park from Side? 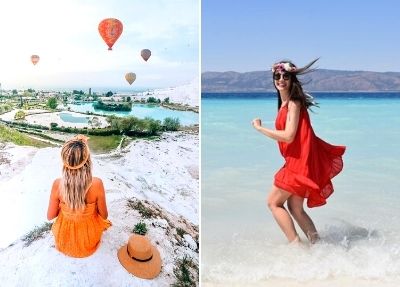 Side Salda Lake and Pamukkale Tour 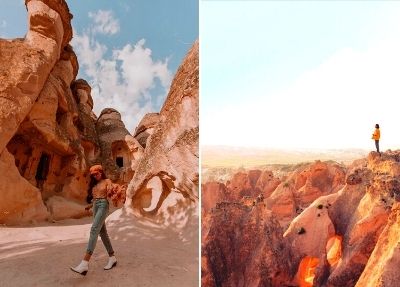