When you book with an account, you will be able to track your payment status, track the confirmation and you can also rate the tour after you finished the tour.
Sign Up
554

Dolphins are incredible mammals. Their ingenuity can only be envied, and the way they quickly find a common language with people is amazing. Alanya Dolphin Show will show you all their skill and magnificence, and their instructors will not let you get bored!

Each dolphin show is a real improvisation. Despite the fact that the dolphins are in constant contact with the instructor, no one can completely produce the same show. Each time, the dolphins try to demonstrate their skills to the general public and are very happy about the feedback when the stands burst into loud applause.

Achieving synchronization is a very difficult task for every trainer. Dolphins are just like people. Each has its own character – some are docile, others are restless. Everyone needs an approach. Sometimes not all dolphins make contact with each other and may refuse to perform in a duet. Just imagine what work is being done to make these incredible beauties appear before you in all their glory!

All kinds of pirouettes, the ability to hold the ball no worse than eminent basketball players, high-speed swims – an enchanting show that you will remember for a long time! Funny dances, greeting the public – dolphins will demonstrate all their skills!

The dolphin show in Alanya is an amazing spectacle in which dolphins will appear from a completely unexpected side. The skills acquired from birth will turn your mind upside down. You just have to wonder how they can do all this? And they can do a lot! Indeed, unlike cruel circus training – raising a dolphin for himself is an interesting game that is not only interesting to him, but also pleasant!

Would you like to join another excursion in Alanya? Check out Alanya Scuba Diving.

Dolphins are beautiful, talented and very intelligent animals. Everyone knows that dolphins more than once saved people in difficult situations and protected them in the sea. This is a creature intellectually unrivaled in any animal variety, and hence they are rightly compared to humans. Dolphins have their own language and strong social connections. They live in families in which several generations are often present. Imagine a dolphin’s grandmother and a playful grandson who occasionally struggles to sneak away and swim in forbidden places.

In the dolphinarium, all the dolphins are also a very close big family. Excellent conditions have been created for them so that they do not feel discouraged. And the fact is proved that the dolphin is inherent in sadness. So there are no sad dolphins in Antalya. Each of them receives a lot of attention and realizes itself in a variety of ways. You’ll see how close they are to the people who are on the show. You will feel through the synchronicity of the dolphins’ movements that they are a close-knit team.

They know that dolphins help people with various diseases and at the Dolphinarium you will feel why. One only has to touch this amazing animal as you will be filled with energy that was previously unfamiliar to you. Your smooth, gliding skin and body temperature, which corresponds to that of humans, gives you a very unusual feeling. Dolphins are extremely curious and talkative, so they will whistle to greet you as soon as you cross the Dolphinarium threshold. And when you come back to the dolphinarium, they will recognize you because they can recognize people even after 20 years of separation. And most importantly, they are so funny that a smile plays on your face from start to finish.

Seals – the name of these animals causes an involuntary smile. They really look like cats, they have a mustache, fur, an affectionate look and they cause an irresistible desire to pet them. Seals love to soak up the sun and, like ordinary cats, generally lead a very measured lifestyle. The difference is that seals live by the sea and you can’t get that in an apartment. Know that zoologists classify fur seals as eared seals, and now that you call your soulmate a lazy seal, you can imagine nature’s wonderful creatures, fur seals and smiles.

In the dolphinarium there is a great opportunity to observe these wonderful animals. Fur seals are playful and very easy to train. They enjoy spending time with people, especially since people always feed them the best delicacy – fish. They are always willing to communicate and very loving by nature. It is difficult to imagine that these animals can dive 200 meters while hunting, but this is a proven fact. You will be amazed by their teamwork and see that they are really excited to perform in front of you.

Beluga is a whale, a great white whale. In childhood, beluga whales are blue, and only then turn white. The animal is very interesting, it is also very easy to learn and adore people’s attention. Therefore, your encouragement and applause during the performance will bring real joy to the beluga whale. Beluga whales have always tried to attract a human’s attention. Therefore, since ancient times, they started a conversation with people when they met, which is why sailors called them “sea canaries”. Beluga whales have great facial expressions and you’ll appreciate it for yourself as you get close to them.

Alanya Dolphin Show is a perfectly prepared show. Underneath the energetic and cutting edge music, the sea creatures will get away with it all: jumping and diving, twirling and playing. They fill the entire space of the water area, catching up and unexpectedly jumping out of the water. Everyone in the front rows gets a fair amount of spray. Dolphins will paint pictures for you and even show musical talents. You will be amazed at what you see and when you return to the hotel from the show you should discuss the show together. And occasionally you will surely return to the Dolphinarium to see if its residents recognize you.

What is included in the price of Alanya Dolphin Show?

The cost of the Dolphin Show tour in Alanya includes transfer from your hotel and back, insurance and an entrance ticket.

How much does the dolphin Show in Alanya cost?

Can you swim with dolphins in Alanya Turkey?

Swim with a dolphin program at Dolphinland Alanya is offered all year round and can be booked for any number of days.

Are dolphins in Alanya people friendly?

dolphins The most popular of all marine species on the Gulf Coast is the bottlenose dolphin! Not only are dolphins one of the smartest and happiest creatures on earth, and dolphins are very friendly to humans

How long is Dolphin Show in Alanya?

Are dolphins safe to be around?

Dolphins have a reputation for being friendly, but they are actually wild animals that should be treated with care and respect.

There is no doubt that these animals exhibit inquisitive behavior, which lends weight to the notion that dolphins do indeed seek human contact with some regularity. One could even say that this is irrefutable evidence: apparently, wild dolphins can have an affinity for humans. 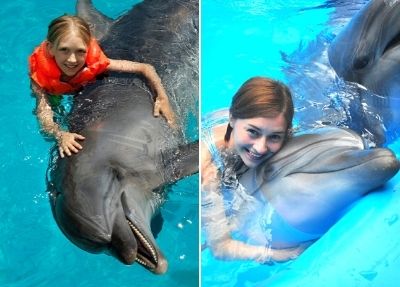 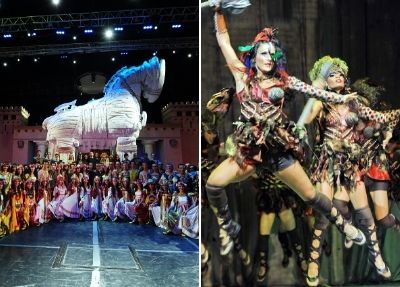