When you book with an account, you will be able to track your payment status, track the confirmation and you can also rate the tour after you finished the tour.
Sign Up
455

Antalya City Tour from Side

Would you like to see the unforgettable beauty and feel the fascinating history of the legendary city of Antalya? Ride a cable car with breathtaking panoramic views and visit the old town where different eras are intertwined? For an exciting excursion and city exploration, take an Antalya city tour from Side.

In the old town you will feel a special atmosphere, as if you have been transported to a distant past. Colorful streets winding like narrow labyrinths, small houses built precisely and cleanly, aromas of oriental spices from the shops – all these little things will penetrate your soul and enchant you from head to toe.

If you are in the old town, you can get to the viewpoint, where a wonderful view of the old pier opens. From there, embark on a short sea voyage to admire the stunning landscapes of the coastal city.

You will come across a beautiful view of the Duden waterfall. The flow of water from the cascading waterfall breaks straight into the Mediterranean Sea. Admire this wonder of nature while strolling along the green park of the same name.

You will also visit a cave located just above the Duden Waterfall. From there you can watch the crystal clear jets of water cascade down like a stream. The rocks in this place will remind you of a fairy tale film.

A ride on the cable car opens up a completely different Antalya to you. You will enjoy a bird’s eye view panoramic view. And after climbing the mountain top of Tyunektepe, you can take stunning photos of the Antalya coast from the observation deck.

Antalya city tour from Side will give you the best emotions and memories!

Antalya City Tour from Side Price 2022

Would you like to join another excursion in Side? Check out Alanya City Tour from Side.

Side to Antalya City Tour

Depending on your hotel location, a comfortable air-conditioned bus will arrive around 8:30-9:30 for you to explore amazing Antalya. You will be able to see the wonderful and majestic Duden Waterfalls. A walk around the waterfall will captivate you with greenery and the peaceful sound of the water.

You will also go through an ancient cave located above the Duden waterfall where you will see ancient burial sites. During a sea trip you will see the Unteren Düden, which is known as the largest waterfall in the world and whose water flows directly into the sea.

You also need to take the cable car to Mount Tunektepe, where stunning views open up already from the funicular. Upon arrival in the old town, you will be transported back in time. A colorful and cozy city will leave you with warm emotions. At the end of the tour, you will be returned to your hotel in Side around 6:00 PM.

When visiting the Dudenpark, you immediately feel the coolness and pleasant humid air, which is very useful on a hot summer day. On the territory of the park you will feel the coniferous aromas and notice the amazing peace and quiet. Duden Park was created at the confluence of the Duden River and the Mediterranean Sea, so the waterfalls are the basis of the entire park.

The Obere Düden has a relatively low height of 27 meters. The waterfall is surrounded by unusual rocks covered with dense green moss. Being in the rocks you can admire the jets of water bordering all the surrounding thickets of different plant species. In one of the rocks you will find the oldest tombs from the 2nd-3rd centuries. Century AD Carved figures of lions can be seen on the sarcophagi. You’ll have 45 minutes of free time to dedicate to walking under the waterfall and relaxing on a bench with a panoramic view of the park.

The Lower Düden is known for its fabulous majesty and the force with which it plunges its jet of water straight into the Mediterranean Sea. This species is a calling card in Turkey and on the Antalya coast. The height of the waterfall is 40 meters and the beauty is incomparable. You can admire this view from a special viewing platform on the shore. You can also take lots of photos from the sea by swimming as close to the waterfall as possible. In the Dudenpark you have 30 minutes for a leisurely stroll and unforgettable photos from the viewing platform. During this time you have enough time to get enough of the nature around you and the power of the local waters.

You will visit one of the most popular attractions of Antalya – the cable car to the mountain peak Tunektepe . From a bird’s eye view you can enjoy a magnificent panorama of the city and the Mediterranean coast.

The cable car was opened to tourists not so long ago, in 2017. Its length is 1706 meters and the climb to the top of the mountain takes 10 minutes. As long as you gently climb to Mount Tyunektepe, which is 605 meters above sea level, you will be amazed by the successive scenic landscapes!

The panorama from the observation deck on Mount Tunektepe will turn your head. You will see the sparkling coast of the Mediterranean Sea, amazing slopes and landscapes covered with various greenery and pine trees, as well as a picturesque city that spreads out under your feet. You will also feel the divine aromas of coniferous forest and sea breeze floating on the top of the mountain. To fully enjoy the enchanting atmosphere here, you will have 20 minutes of free time to spend in a local cafe with a cup of Turkish tea.

To replenish the energy lost on the journey, you need to fill up on a delicious lunch at a national Turkish restaurant. Here you will be offered the best kebab in the whole city, which is known for its juicy and melt-in-the-mouth meat.

After lunch, visit the ancient city of Kaleiçi, famous for its comfort and hospitality in our time. The first buildings in Antalya were born in this place, and some of them have been perfectly preserved in their place.

The history of the old town goes back to the 2nd century BC. when Attalus, king of Pergamum, ordered his subjects to find the most beautiful place on earth. His subordinates managed to find him on the shores of the Mediterranean Sea. A city called Attalia was built here by order of the king. The city was constantly transitioning from one government to another. It was conquered by many peoples, so here you can see a particle of every Mediterranean culture.

As you cross the threshold of the famous Arch of Hadrian, you enter the Old City, where many historical eras are intertwined. The arch was erected in 130 AD to mark the official arrival of the Roman Emperor Hadrian. Nowadays it is a Roman-era monument, mostly memorable for its marble columns.

The city of Kaleichi has preserved many architectural monuments from different eras. You will see the Hidylrik Tower, which offers breathtaking views of the sea and the city as soon as you climb to its top. The height of the tower is 14 meters and it was built in the 2nd century BC. Built by the Romans. Its main function was to serve as a guide for ships.

You can also see Iskele Mosque, Kesik and Yivli Minarets, Old Clock Tower and many more preserved historical monuments of the city.

What is included in Side to Antalya City Tour Excursion cost?

The price of excursion from Side to Antalya city tour includes transfer, services of a professional English-speaking guide, lunch, insurance, cable car to Tunektepe Mountain, entrance tickets to Duden Waterfalls and a boat ride.

How long is the Antalya city tour from Side takes?

How much is Side to Antalya city tour?

Antalya City Tour from Side Reviews 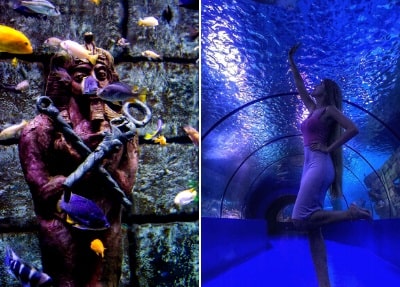 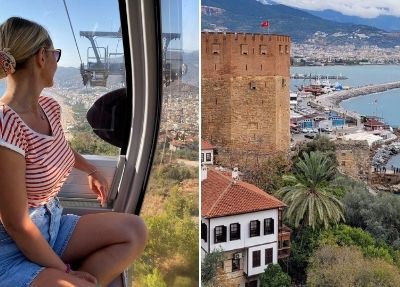 Alanya City Tour from Side