When you book with an account, you will be able to track your payment status, track the confirmation and you can also rate the tour after you finished the tour.
Sign Up
819

Pamukkale is a visiting card of Turkey. More than 2 million tourists visit this amazing place every year. This excursion is a unique opportunity to visit the famous “Cotton Castle”, one of the greatest ancient cities of the Roman Empire – Hierapolis and rejuvenate in the thermal springs of the Cleopatra pool. Fethiye Pamukkale Tour invites you to spend an unforgettable day that will decorate your vacation!

Early in the morning we will pick you up from your hotel and set off on a comfortable bus, accompanied by a professional English speaking guide, to Pamukkale. On the road, which lasts approximately 3 hours, you can enjoy the picturesque views of mountain ranges, orange groves and countryside landscapes.

Pamukkale is a unique natural site that is included in the list of UNESCO World Heritage Sites. A miracle of nature is a cascade of snow-white travertines with thermal water. For millions of years, water saturated with potassium bicarbonate flowed down the slopes of these mountains, forming a white precipitate and miniature pools. You can walk on the travertines, but only take off your shoes.

Next to the travertines is the ancient city of Hierapolis, translated from ancient Greek means “blessed city”. On its territory you can see many historical monuments of architecture: the Greco-Roman theater, the Roman baths, the Basilica of St. Philip, the Agora. An educational walk is an opportunity to plunge into ancient times and imagine how people lived many years ago.

On the territory of Pamukkale there is another attraction – the Cleopatra pool. Anyone can swim in the thermal water. Mineral water has a healing effect on the body and promotes its rejuvenation. Having walked enough, the way back is waiting for you.

Fethiye Pamukkale Tour is one of the most interesting and informative excursions in Turkey. It will give you an acquaintance with a new historical place, impress and remember for a long time. You can book an excursion directly on our website or by contacting our operator who will answer all your questions.

Pamukkale Landscape Protection Park is a true natural wonder. Its name means “Cotton Castle” , which is located on an area of ​​almost 1077 hectares, near the city of Denizli, 230 kilometers from the city of Fethiye.

The peculiarity of this area lies in the fact that geothermal springs with mineral water have been operating here for many centuries.

During this period, unique geological formations appeared – dazzling snow-white potash terraces called travertines, which are the result of a natural biological process.

Nature itself built this phenomenal cultural World Heritage site, recognized as such by UNESCO , with the help of water .

The history of the formation of Pamukkale

The snow-white Cotton Castle may seem like incredible fairy-tale magic, although this natural phenomenon has a scientific explanation.

Travertines consist of layers formed from successive layers of calcium deposits as a result of the precipitation of minerals during cooling and evaporation of water. Hot water, which rises from underground depths in four sources, has an initial temperature of 35 0C.

Gradually cooling down, while flowing down the slope, which has a height of 60 meters and reaches a width of 200 meters, a precipitate of calcium salts is formed in the water channel, which has a soft helium structure.

Then, as a result of a natural chemical reaction, the gel-like sediment is transformed, from which solid rock and beautiful stalactite patterns are formed.

This is how this unique stone massif was formed, which is an impressive sight with its monumental bizarre shape.

Like drifts of crisp snow under the sun, the cascades of terraced baths enchant with their sparkling shimmer against the azure southern sky, arousing the admiration of onlookers.

Hierapolis – an ancient analogue of a modern balneological resort

The travertines of Pamukkale are part of the Hierapolis Archaeological Complex, which includes the ruins of the ancient city of Hierapolis.

It has been damaged by several earthquakes. The best-preserved antique pool of Cleopatra with thermal healing water, enriched with minerals and having rejuvenating properties, has been best preserved to this day. This is an artificially formed pond with columns erected by Roman architects.

The water temperature in this pool is 36 0C, here you can swim with pleasure, recovering from many diseases. History and archeology buffs can explore the ruins of an ancient Hellenistic city dating back over 2,500 years.

Ancient Hierapolis flourished under the leadership of the Roman Empire, which is reflected in its architecture. Subsequently, the city of Hierapolis became the center of the bishopric in Byzantium.

Walking along the ruins of Hierapolis for about two kilometers, you can go to the largest ancient necropolis of those that are in Turkey.

Many sarcophagi and tombs are well preserved here, and some of them have been skillfully restored. The tomb and basilica of St. Philip, one of the twelve apostles of Christ, were also found during excavations of the ruins of Hierapolis, since then, this place has become one of the centers of Christian pilgrimage.

History by the hands of ancient builders

The excursion program includes visiting many places of the ancient city – the Temple of Apollo, the pagan temple of Pluto, the complex of baths, Roman and Byzantine gates, fountains, as well as the ancient Theater, which could receive from ten to twelve thousand spectators.

These objects were reconstructed by archaeologists over a long period of time, large-scale restoration work was carried out from 1960 to 2013.

This educational excursion should become a must-do during your holidays in Fethiye, as visiting Pamukkale will always be remembered, thanks to unforgettable impressions of the magnificent historical and natural sights of this world famous National Reserve of Turkey.

How long does it take to reach Pamukkale during Excursion from Fethiye to Pamukkale?

It takes about 3 hours by bus to reach Pamukkale on your Fethiye to Pamukkale excursion as the distance between Fethiye and Pamukkale is 230 kilometers.

What can you see during the excursion from Fethiye to Pamukkale?

During the excursion from Fethiye to Pamukkale you will see the white travertines of Pamukkale, Cleopatra’s Pool and the ancient city of Hierapolis.

How much is the Fethiye Pamukkale Tour Price? 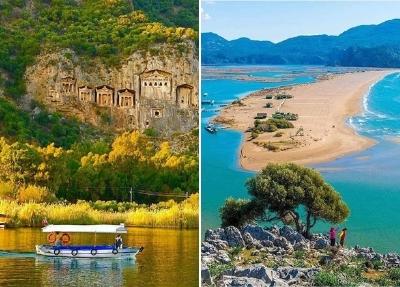