When you book with an account, you will be able to track your payment status, track the confirmation and you can also rate the tour after you finished the tour.
Sign Up
462

Would you like to see the full diversity of the underwater world, how to walk on the seabed and see sharks and rays swimming overhead? Then enjoy an exciting excursion to Kemer Antalya Aquarium, where you can feel like a fish in water!

In the aquarium you can visit 40 thematic aquariums representing more than 10,000 species of underwater inhabitants of the Atlantic, Indian, Mediterranean, Red and Black Seas, Nile and Amazon, Asian reservoirs, inhabitants of deep and shallow waters. You will see aquariums with different decorations, corals, algae and fancy fish.

You will feel vivid emotions as you stand in a huge 131-meter underwater tunnel with sharks and giant turtles swimming overhead. The Antalya Tunnel Aquarium is considered the fifth largest in the world and the second largest in Europe.

You will visit the terrarium with representatives of rare species of amphibians and reptiles. Venomous snakes, scorpions, lizards, spiders and crocodiles, see them all here! Your stay in different themed rooms will be accompanied by the sound of the rain, the wind and the cries of the monkeys.

Kemer Antalya Aquarium will give you an unforgettable vivid experience. You will remember these wonderful moments with your family and capture them in great photos.

Would you like to join another excursion in Kemer? Check out Kemer Land of Legends Theme Park.

At 11:30 a.m., a comfortable bus will pick you up from your hotel and take you to Antalya Tunnel Aquarium. The journey does not take long, about an hour. The main entrance to the aquarium is marked by a huge fountain in the shape of a large whale leaping out of the water. The territory of the Antalya Tunnel Aquarium with an area of ​​15 thousand square meters. m, equipped so that no child remains indifferent. The walls are brightly painted, with original decorations and tropical plants.

40 halls with different themes await you. All are furnished in a varied, authentic and interesting way. Different light and sound solutions were used for each hall. To fill all the aquariums, 7.5 million liters of water, 10 thousand species of fish and other representatives of the underwater world were used.

You will visit one of the longest underwater tunnels in the world with a length of 131 meters. In it you will see how divers feed sharks and perform tricks for the public, as well as many species of the most unusual fish and other animals.

You will visit a wildlife park where you will explore the most colorful, poisonous and interesting reptile species accompanied by the sounds of wind and rain.

If you wish, you can visit the halls not included in the excursion price: the Snow City, the Oceanride XD cinema, gaming complexes, cafes and souvenir shops. In 2-2.5 hours the tour will end and the transfer will take you back to your hotel around 4:30pm.

You will be amazed at the splendor of the exhibitions. You will see sunken ships, jewels, ancient statues, a sunken car, a wrecked plane, entire palaces and cities. You can learn more about the fish, jellyfish, crustaceans, molluscs, algae and corals that inhabit aquariums from the information boards. You will enjoy viewing peacefully swimming fish, the variety of their colors and the variety of coral shapes.

Antalya Tunnel Aquarium is divided into three zones: tropical submerged city zone and zone with the most unusual and dangerous underwater creatures. The bottom of the tropical zone is covered with a coral reef, and you can also see a mysterious cave where sea urchins seek rest. And colorful nimble fish will amaze your imagination. In the Sunken City exhibition you will see a gigantic shipwrecked medieval ship. The main aquarium is inhabited by very dangerous species, more than a hundred sharks, giant stingrays and moray eels swim in the main hall. All decorations are striking in quality and scale.

You walk through the tunnel aquarium, which at 131 meters long and 3 meters wide is one of the largest in the world. You will feel like you are walking underwater. Hundreds of different fish, giant tortoises and sharks will swim over your head.

The tunnel’s unique decorations were created by an Italian sculptor and brought to life by artisans from South Africa. Here you can see statues from Easter Island , a pirate galleon sunken at the bottom of the sea, chests full of lost treasure and much more.

You will be amazed by the largest coral reef in the world. Among the many aquarium decorations you will see ancient sculptures, amphorae, statues and ancient city ruins. The tunnel’s unique entourage will put you in the spirit of adventure.

Thanks to a special filter system according to European standards, the water in the aquarium tanks is very clean. Dimmed light is observed in aquariums, which fish are more familiar with in their natural environment. For this reason, the use of camera flashes is prohibited.

You will visit the terrarium with representatives of rare species of amphibians and reptiles. Venomous snakes, scorpions, lizards, spiders and crocodiles, see them all here! Your walk through the themed rooms with the most unusual creatures will be accompanied by the sounds of rain, wind and the cries of monkeys to create a realistic adventure.

While enjoying the underwater kingdom, you can teleport to the snow world. Snowy forests, Santa’s village, Eskimo dwellings are just a small part of everything that can be found here. You can immerse yourself in childhood, ride ice slides and play snowballs made of real snow. On the territory of the snow city there are many labyrinths, fortresses, sculptures made of snow and ice. Artificial snow falls from time to time, creating a fabulous atmosphere. You will be given special warm suits for the visit, since the temperature here is -5 degrees Celsius.

If you wish, you can enjoy a three-dimensional film about an underwater journey in the Oceanride XD Cinema. Together with Captain Barbarossa you will get to know the legends of the seas.

You will have the opportunity to swim with fur seals and sharks in the outdoor coral sand pool. These sharks are absolutely harmless, you can even feed them!

And for the youngest guests of the Antalya Tunnel Aquarium, many other entertainment options are offered: an aquarium-themed play area, a diving school, an entertainment center, a 5D cinema, a playground, a pinball club, restaurants and cafes, a souvenir shop with toys, exhibition halls.

At the end of the walk through the aquarium, a transport will be waiting for you to take you to the hotel at 4:30 p.m. in the afternoon.

What is included in the Antalya Tunnel Aquarium price from Kemer?

How long does an Antalya Tunnel Aquarium from Kemer last?

How much is the Antalya Tunnel Aquarium from Kemer? 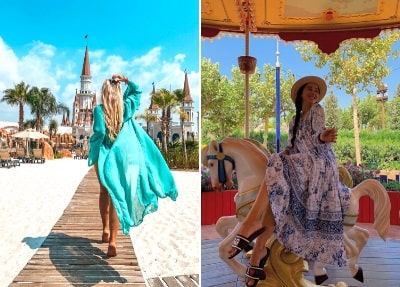 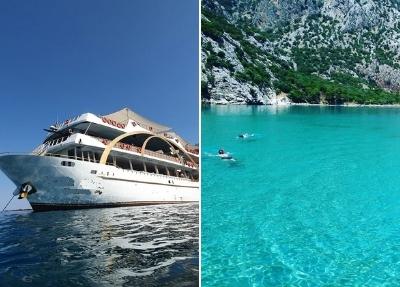