When you book with an account, you will be able to track your payment status, track the confirmation and you can also rate the tour after you finished the tour.
Sign Up
976

Would you like to see the ancient city of Istanbul in all its glory? To feed on his great story? Do you feel like a participant in the centuries-old events of the past and immerse yourself in its cultural heritage? Then Antalya İstanbul Day Trip is for you!

Embark on a journey to the ancient city of Istanbul, which was called Constantinople during the Roman Empire. There is a large number of ancient monuments, architecture, as well as various parks and museums.

During Antalya İstanbul Day Trip you will see the grandiose ancient buildings. The famous and unique Sultan Ahmed Mosque (Blue Mosque) is the main mosque in Istanbul, which has great architectural value and long history. The German fountain is a curiosity of this place, a symbiosis of different architectural styles. You can walk along the Hippodrome Square and get acquainted with the ancient history of its creation. Visit the great Topkapi Palace , the main palace of the sultans during the Ottoman era. Touch the history of the grandiose creation of multiple cultures at the Hagia Sophia Mosque and feel the oriental flavors passing through the Egyptian Bazaar.

At the end of a day full of events and impressions, you will have the opportunity to relax and walk between two continents along the Bosphorus on a comfortable yacht. Here you will get incomparable pleasure from the panorama of the straits and see the sights of Istanbul highlighted with colorful lights.

See all of this on a fascinating sightseeing tour of Istanbul from Antalya. The unsurpassed beauty of the ancient city and historical cultural monuments in one trip!

Would you like to join another excursion in Antalya? Check out Antalya Fire of Anatolia Troy.

Your Istanbul day trip from Antalya begins with a comfortable bus that will pick you up from your hotel and transfer you to Antalya Airport. The day before departure you will be informed of the exact flight hours. You fly to Istanbul by plane, where you will be picked up and take an interesting tour. During the tour you will visit the most famous landmarks of Istanbul: Sultan Ahmet Mosque (Blue Mosque), Hippodrome, German Fountain, Topkapi Palace, Hagia Sophia, Egyptian Shopping Arcade.

You will have time to walk around Sultanahmet Square and shop for Turkish sweets and spices at the Egyptian Bazaar. You will take an evening cruise along the Bosphorus on a comfortable yacht. During the tour you will be offered lunch and dinner with traditional Turkish dishes. At the end of the tour, you will drive to Istanbul Airport. Upon arrival from Antalya Airport, you will be transferred to your hotel in a comfortable bus.

The Sultan Ahmed Mosque or Blue Mosque is the most important mosque in Istanbul. This is a unique building of great architectural value. It was built in 1616 by order of the Turkish Sultan Ahmed I. Sultan Ahmed I could not win a single war for a long time and in order to receive God’s blessings, he began to build this mosque. The mosque was built of precious stones and unique marble. The niche for prayers (mihrab) is carved entirely from a single block of marble. Here is a unique black stone specially brought from Mecca.

You will be amazed by the architectural style of this grandiose structure. The best techniques of Byzantine and Ottoman architectural style were used during construction. One of the walls of the mosque is entirely decorated with stained glass windows – the work of the best Venetian masters. There are 260 of them in total. Unfortunately, time was merciless for them and now they have been replaced, but they still contain the spirit and flavor of antiquity.

The Hippodrome is the central square of Istanbul. More than 2,000 years ago this area was called At Meydany, which means “horse area”. The construction was started in 203 by the Roman Emperor Septimius Severus. This is where the horse races in Constantinople took place. Columns and obelisks installed in the Byzantine period have survived in the area of ​​the square to this day. For many years it remained the center of the capital’s sporting and social life. It will be incredibly interesting for you to see what the ancient hippodrome is today, look at ancient buildings and feel like a hero of ancient events.

The German Fountain is located on the Hippodrome Square. The fountain is called German because it was a gift from German Kaiser Wilhelm II to Sultan Abdul Hamid II in honor of the agreement between Germany and Turkey on the construction of the Istanbul-Baghdad strategic railway.

You will see an incredibly beautiful octagonal structure with a dome supported by graceful columns. The architecture of the fountain is not typical of oriental tastes. So it attracts guests and residents of the city. The elements of the fountain were manufactured in Germany and shipped to Turkey. It was opened in 1901.

Topkapi Palace complex is a great landmark of Istanbul and Turkey in general. The most important historical events of the Ottoman Empire took place within its walls. The palace was built by Sultan Mehmed II in 1478. How much is hidden within the walls of this grandiose structure. Judgments were made here, the fate of concubines was decided, plans for the conquest of new lands were drawn up.

Topkapi Palace is twice the size of Vatican Square. More than 50,000 people could live here at the same time. The complex included mosques, baths, temples, parks and even zoos. The harem, which was transferred to the territory of the palace in the 16th century, deserves special attention. The history of the palace is more than 400 years old – 25 Ottoman sultans stayed here. After visiting the palace, you can imagine how the sultans and their courtiers lived.

Hagia Sophia – Cathedral of Hagia Sophia. During its history, it changed several roles – the former patriarchal Orthodox cathedral, then a mosque for a long time, now a museum, a symbol of the “golden age” of Byzantium. Hagia Sophia was the largest church in Constantinople. All the rulers of the Eastern Roman Empire were crowned here.

Due to the fact that the building played different roles at different times, several cultures are intertwined. Christian frescoes, Arabic script, Muslim mihrab. You have a unique opportunity to see ancient relics that have miraculously survived to this day and that you will not see anywhere else. Incredible historical events took place here. For example, the baptism of Princess Olga in 955. Many legends are associated with the cathedral.

You will visit one of the most important spice markets in Istanbul – the Egyptian Bazaar. It is called Egyptian because Indian spices and cotton came here precisely through Egypt in the mid-17th century. Now on the market you can buy not only spices, but also a variety of different goods. For example dishes, textiles, local delicacies, oriental sweets. You will definitely like to plunge into the indescribable taste of the oriental bazaar. You will have free time to shop for souvenirs and sweets.

Boat Trip Along the Bosphorus

You will embark on an unforgettable 1.5 hour sea journey along the famous Bosphorus – the heart of the Turkish city. You sail on a comfortable yacht between the two continents of Europe and Asia Minor. From the yacht you can enjoy a magnificent view of villas, fortresses, mosques and palaces on the shore of the strait. You will also sail bridges that glow with colorful lights. This walk allows you to take a break from a busy day and breathe in the fresh, evening sea air.

Your exciting journey will last all day. Therefore, a hearty lunch and dinner awaits you during the tour. The menu includes grilled chicken, meat patties, rice, salad and a variety of snacks. You have the option to purchase drinks for an additional fee.

What is included in the price of Istanbul Day Trip from Antalya?

The cost of a tour of Istanbul from Antalya includes a return transfer from your hotel, a professional English-speaking guide, entrance tickets to all sightseeing tours, flight tickets to Istanbul and back, lunch and dinner, and insurance.

How much is Istanbul Day Trip from Antalya?

Where to book a day trip from Antalya to Istanbul?

You can book Istanbul Day Trip from www.onlineexcursions.com. No deposits are required with your reservation.

How long does a trip from Antalya to Istanbul take? 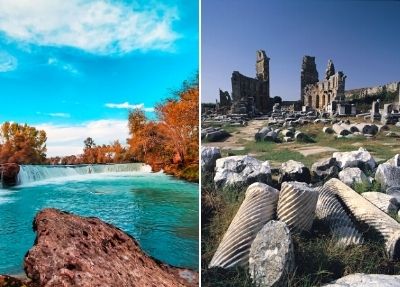 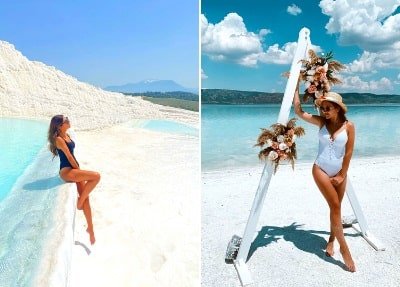