When you book with an account, you will be able to track your payment status, track the confirmation and you can also rate the tour after you finished the tour.
Sign Up
353
Online Excursions > Antalya Perge Aspendos Side Tour

Would you like to see ancient Greek cities? Touch on the centuries-old history of the formation of the Ottoman state? Antalya Perge Aspendos Side Tour will help you to fulfill your desires in just one day!

A fascinating excursion from Antalya to Perge Aspendos Side will help you plunge into the centuries-old events of the past and enjoy the beautiful views of the natural landscapes.

During the trip you will visit two ancient Greek cities with a long history of Perge and Aspendos. Walk the streets of these ancient cities that have survived to this day. You will see beautiful architectural monuments built many centuries ago.
The ancient amphitheater in Aspendos will surprise you with its grandeur. The giant, designed for 17,000 spectators, is very well preserved. You will have a wonderful opportunity to touch on the historical events of the past and introduce yourself as an old resident of Aspendos town who came to see the performance.

In the city of Perge you will see the ruins of the once beautiful and majestic city, known for its largest stadium in Asia Minor. Here, in the midst of all this splendor, you can take really beautiful photos.

Then visit the wonderful city of Side Turkey and one of the two most beautiful waterfalls, Manavgat or Kurshunlu. You will take great pleasure in watching the powerful water streams descend with incredible speed creating the magical beauty of the falls.

A fascinating trip Antalya Perge Aspendos Side Tour is a unique opportunity to see many interesting sights in one day! This tour will surely bring you many wonderful moments and will be remembered for a long time!

Price List for Perge Aspendos Side Tour from Antalya 2022:

Your fascinating journey through the ancient cities begins with a comfortable coach that will pick you and your hotel up.

The first stop on your way is the ancient Greek city of Perge. Here you will find an unforgettable walk among the beautiful ancient ruins.

Then drive to the ancient city of Aspendos, where you will be amazed by the huge ancient amphitheater that has been well preserved to this day. A hearty, full lunch awaits you here.

The end point of your most interesting trip is Side city where you will visit one of the two amazing waterfalls Manavgat or Kurshunlu. After your beautiful journey full of vivid impressions, you will be taken back to your hotel.

Right at the start of your exciting journey you will stop at the once thriving ancient Greek city of Perge. The history of this city stretches over several millennia. Today, the ruins of the ancient city of Perge are one of Turkey’s most famous sights. You will be interested to know the legend about the origin of this city. It was founded in the 12th century BC. after the Trojan War by the soothsayer Calchas. For many centuries of its existence, Perge passed from hand to hand. 333 BC it was conquered by Alexander the Great, and even then the city was rich and prosperous.

In the II century BC Perge came under the rule of the Romans and reached the height of its heyday and power during this period. All significant buildings erected in the city of Perge and preserved to this day belong to this period. After the Romans, Byzantium ruled the city for a long time, thanks to which a large number of churches and monasteries were built on its territory. After the XIV century Seljuk conquest of these areas, the city became part of the Ottoman Empire.

On the territory of the city of Perge you can see the oldest theater built in the 1st century AD. You will be amazed by this truly grandiose structure, designed to hold 15,000 spectators. In the niches of this theater there were a large number of sculptures of gods and emperors, and the stage of the amphitheater was decorated with ancient reliefs.

Perge is also famous for its stadium, the largest stadium in Asia Minor. It was designed for 12,000 spectators and is located opposite the theater.

Walking through the ancient ruins of the city, you can see the old marketplace that has survived to this day – the Agora, which was the center of the city. The territory of the agora is 75m², on the sides there were shopping arcades.

The city of Perge was famous for its huge complex of famous Roman baths. Not only steam baths were located here, but also many other rooms. The Roman baths were not just a place of rest, it was here that the most important strategic and political issues were resolved. The building of the Roman baths is entirely covered with marble and decorated with numerous sculptures. The way ancient people knew how to handle a stone many centuries ago will simply amaze your imagination. You will also see three basilicas located on the city’s territory, built in the 6th century.

You have a unique opportunity to stroll through the famous ruins of the ancient Greek city that still retains its flavor and take wonderful unforgettable photos.

The ancient city of Aspendos, like Perge, has a long history and, like Perge, has seen numerous conquests. The city was ruled by the Romans , Byzantines and Seljuks . Built on the banks of the navigable river Evrymedon (now Kepruchay), Aspendos was a port city and an important trading center.

The main attraction of the ancient city of Aspendos, which has survived to this day, is the ancient amphitheater built in the 2nd century AD. You will be amazed at how big this theater is, it can hold 17,000 spectators at a time and has amazing acoustics. During the Byzantine reign, the theater was used as a huge open-air church and was converted into a caravanserai by the Seljuks in the 12th century. You will be amazed how well preserved this old giant is, because not so long ago, even today, it was used for concerts and festivals.

The city itself is not as well preserved as its theater, but you will love to plunge into antiquity, stroll along the old, almost ruined streets and take beautiful unforgettable photos on its territory.

After a long journey you will surely want to replenish the expended energy, so a hearty, wholesome lunch awaits you. The menu consists of fresh vegetable salad, rice and your choice of grilled fish or chicken.

If you go to Side Turkey city, you will have a wonderful opportunity to visit one of the two most beautiful waterfalls Manavgat or Kurshunlu.

Manavgat is an artificial waterfall with unique dimensions. Its height reaches 2 meters, and its width is up to 40 meters. It is located near the city of Side and was created during the formation of the dam when a reservoir was built on the Manavgat. You will be amazed by its appearance, and the images against the background will turn out to be simply amazing. The peculiarity of the waterfall is that during high tide it is completely hidden under water.

The Kursunlu Waterfall is located in the national nature park of the same name in the middle of the cedar forest. Walking through the extraordinary beauty of the park, you will see how streams of water fall from a height of 18 meters straight into the emerald lake. You can make a wish by touching these jets of water and it will definitely come true. This is an unusually beautiful place, so the photos are just amazing against the backdrop of these beautiful landscapes.

What is included in the Perge Aspendos Side tour price from Antalya?

Perge Aspendos Side Tour from Antalya price includes transfer from your hotel and back, insurance, professional English speaking guide, entrance tickets and lunch.

How much does Perge Aspendos Side Tour from Antalya price?

Where to Book Perge Aspendos Side Tour from Antalya?

You can book Perge Aspendos Side Tour from Antalya www.onlineexcursions.com. No deposits are required with your reservation.

How long is Perge Aspendos Side Tour from Antalya?

Perge Aspendos Side Tour from Antalya operates from 8:00 AM to 6:00 PM. Total tour time is approximately 10 hours. 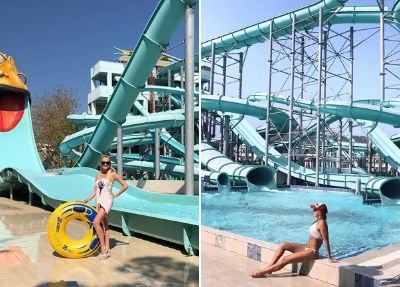 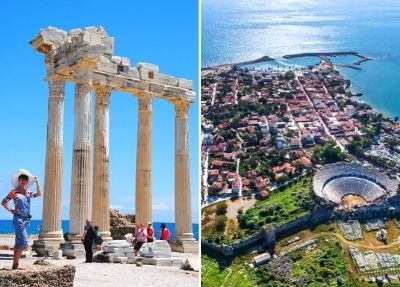