When you book with an account, you will be able to track your payment status, track the confirmation and you can also rate the tour after you finished the tour.
Sign Up
304
Online Excursions > Day Trip to Istanbul From Pamukkale

Day Trip to Istanbul From Pamukkale

You will travel to the largest city in Turkey and one of the most populous cities in the world – Istanbul. It houses the largest airport in the world with an area of ​​1,300,000 m². The city has 70 company museums, 49 historical churches, 64 mosques, 17 palaces and many other important ancient sights.

You will visit the most important mosque in Istanbul – the Blue Mosque or the Sultanahmet Mosque. The construction of this grandiose mosque was completed in 1616 and lasted 7 years. You stroll through the historic Hippodrome Square. You will be amazed by the German Fountain in Sultanahmet Square and the painting with golden mosaics.

You will see one of the largest palaces in the world, the main palace of the sultans of the Ottoman Empire – Topkapi Palace. Its area reaches 700,000 square meters. m and it is included in the UNESCO World Heritage List. Feel the power of two religions at the Hagia Sophia Mosque. In the most important market in Istanbul – the Egyptian Bazaar – you can find a wide range of Turkish sweets and spices.
Sail along the famous Bosphorus Strait on a snow-white yacht and admire an incredible panorama of the unique city of Istanbul.

Feel the Turkish flair, visit two continents, see historical sights and places of legendary events – all this is possible thanks to Day Trip to Istanbul from Pamukkale!

Price List for Day Trip to Istanbul from Pamukkale 2022:

Excursion from Pamukkale to Istanbul

The day before the excursion you will be informed about the exact departure time to Istanbul. A comfortable car will arrive at your hotel and take you to Denizli Airport . A transfer will be waiting for you when you arrive in Istanbul. You will be picked up and taken to the city’s most popular destinations.

Then take a boat trip on a yacht along the Bosphorus. At the end of the excursion you will have a full dinner and be transferred to the airport. Upon arrival in Denizli, you will be picked up and transferred to your hotel.

Your acquaintance with Istanbul begins on the way to the oldest district of Istanbul – Sultanahmet. You will be amazed by the variety of architecture and the unique atmosphere of the city. Istanbul was founded as early as 660 BC. Founded. Due to its strategic location between the three seas, different peoples tried to take possession of the city at all times. Different cultures and nations have intertwined in Istanbul since ancient times. You will definitely notice this when you look at the unique symbiosis of architectural styles.

Blue Mosque (Sultanahmet Mosque)
You will see the Sultanahmet Mosque from afar. This is the most important mosque in Istanbul. It was built in 1616 by order of Sultan Ahmed I. The construction lasted 7 years. You will be amazed by the central hall of the mosque, which is covered with a dome 43 meters high, and the dome itself is supported by huge columns with a diameter of 5 meters. Around 20,000 handmade blue and white ceramic tiles from Iznik were used for the decoration. You will see many floral designs – lilies, carnations, roses and traditional tulips. Iznik has always been known for its ceramics. More than 50 different varieties of tulips were used for the patterns on the ceramic tiles. The mosque has 260 windows and the floor is carpeted. On a marble prayer niche is a black stone,

This mosque is unique in that it does not have 4 minarets like in all other mosques, but up to 6 minarets. It is believed that when building the temple, the architect made a mistake and built 6 minarets, as in Mecca itself. The mosque in Mecca wanted to surpass all the mosques in the world, so they had to finish building another minaret.

You will be amazed by the interior of the mosque, the huge gates, the painted dome and the inner courtyard.

You will visit the site of the ancient Hippodrome, now part of Sultanahmet Square. Construction began as early as 203, when the city of Istanbul was still called Byzantium. The hippodrome had a capacity of over 100,000 people. Once upon a time there were chariot races, gladiator fights and a circus. You will see many columns and tall obelisks from Byzantine times, a serpentine column and a German fountain.

You will be amazed by the 20 meter obelisk made of pink and white Aswan granite erected in 390 in the Hippodrome Square. It was delivered from Egypt itself especially for Emperor Theodosius I. Initially, it had a height of 32.5 meters. The obelisk is covered with hieroglyphs dedicated to Pharaoh Thutmose III. And dedicated to the god Amon. It was supposedly built in the 16th century BC. and is considered to be the oldest sculpture in Istanbul.

On the square you will also see a 5 meter long serpentine column. It was brought from Greece in 326. The snake column shows 3 snakes intertwined. It symbolized the victory of the Greeks over the Persians in 479 BC. These serpents were cast from the bronze shields of the fallen Persians.

At the entrance to the old hippodrome you will see a German fountain donated by the German Empire to the Ottoman Empire. It was built in 1900 and brought to Istanbul from Germany. It looks like a gazebo. The dome is decorated with golden maaics and is supported by 8 columns of hypabyssal rock porphyry.

During the eventful tour, a hearty lunch with various main courses, salads and appetizers awaits you. After that, you have free time to explore Sultankhmet Square.

Then drive to the historic center of Istanbul to the Topkapi Sultan’s Palace, which was the main residence of the sultans of the Ottoman Empire until the mid-19th century. It will surprise you, but on the site of Topkapi Palace there was an ancient acropolis and the Temple of Aphrodite. Topkapi took several decades to build, starting in 1465. The total area of ​​the whole complex is 700,000 square meters. m. It is twice the size of the Vatican. More than 50,000 people worked and lived here. The largest reconstruction of the palace took place in the 16th century during the reign of Sultan Suleiman the Magnificent at the request of his beloved wife Alexandra Anastasia Lisowska. At the moment this is one of the biggest attractions in Istanbul.

In 1923 Mustafa Kemal Atatürk declared this palace a museum. The palace’s collection of exhibits is one of the three rarest in the world, numbering more than 65,000 exhibits (this is only 10% of the exhibits on display). It also contains Muslim shrines such as the cloak and sword of Prophet Muhammad.

You will be delighted to walk around these historical places where not so long ago sultans and courtiers lived, where there were harems and hammams.

You will see what was once the largest and most beautiful Hagia Sophia. In 1453, after the Ottoman conquest of Constantinople, the Orthodox Church was converted into the Hagia Sophia Mosque. Four minarets were completed for him and prayers were performed in them. Subsequent grandiose mosques were built on the prototype of Hagia Sophia.

In 1934 Mustafa Kemal Atatürk converted the mosque into a museum. During the restorations, many unique frescoes and mosaics were uncovered under layers of plaster, depicting the faces of saints and church scenes. You can see them walking around the temple.

On July 10, 2020, current Turkish President Tayyip Erdogan turned the temple into a mosque again. Sophia prayers are performed in the Great Mosque of Hagia on Fridays. On this day, images of Christian saints are covered with cloth.

Strolling through the Egyptian Spice Market will help you feel the real oriental taste. It was once part of the Silk Road. Spices and condiments were shipped to Europe from India through Egypt.

This shopping arcade took 67 years to build – from 1597 to 1664. The atmosphere in this market is amazing. The number of multicolored goods on the shelves, the fabulous interior of the building and the good-natured salespeople are dazzling.

You will have free time and you can taste and buy sweets, spices and herbs, dried fruit and meat specialties, medicinal herbs, various dairy products and a wide range of olives. As well as multicolored Turkish textiles and fabulous dishes, as for the sultans. You will surely be steeped in the atmosphere of a Turkish fairy tale.

Boat trip on the Bosphorus

After a noisy, atmospheric stroll through the historic streets of Istanbul, a peaceful cruise on a yacht along the Bosphorus awaits.

This is a unique street dividing the city into two continents – Europe and Asia Minor. It was formed 7600 years ago by a powerful jet of water as a result of melting glaciers. Now it connects the Sea of ​​Marmara and the Black Sea and is considered a very important strategic location.

On board the ship you can comfortably enjoy strong Turkish tea in an original glass cup, observe many beautiful palaces, fortresses and mansions built on the shores of the strait itself.

At the end of a busy day, a hearty Turkish dinner awaits. A varied menu with: grilled chicken, turkey chops, rice, vegetable salad and various snacks.

After a great time in Istanbul, you will be transferred to the airport. When you arrive in Denizli, a transport will be waiting for you to take you to the hotel.

Which attractions will you visit during the Pamukkale to Istanbul excursion?

During the excursion from Pamukkale to Istanbul you will visit Sultanahmet Square and Mosque, Hippodrome Square, Topkapi Palace, Hagia Sophia Mosque and Egyptian Bazaar. Take a cruise on a yacht along the Bosphorus.

What is included in the price of a tour from Pamukkale to Istanbul?

How much does a trip from Pamukkale to Istanbul cost?

The price of the excursion from Pamukkale to Istanbul costs 200 euros for adults and children over 2 years old, for children from 0 to 2 years old are free. 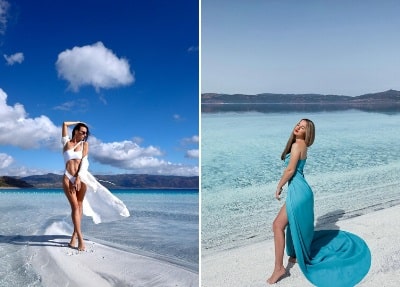