When you book with an account, you will be able to track your payment status, track the confirmation and you can also rate the tour after you finished the tour.
Sign Up
567

Would you like to experience an indescribable feeling of freedom, drive along the mountain serpentines in jeeps and see Turkey’s most mystical phenomenon – the fiery mountain?  Kemer Olympos Yanartas Jeep Safari from Kemer allows you to spend an unforgettable day in nature and leave beautiful memories of a mysterious place in your memory.

You can expect a grandiose and fascinating ride along the mountain slopes of the Tauride Mountains in modern jeeps. You will be able to see the breathtaking scenery of the mountains covered with forests, the azure sea and the unique surroundings of Kemer.

The first stop of your journey is the magnificent bay of Olympos. You will swim in the azure waters of the Mediterranean Sea, travel back in time to explore the silent ruins of the ancient city, feel the merging with nature, breathe the sea air and the intoxicating scent of the laurel trees growing on the territory of Olympos. grow .
The next stop after a breathtaking climb into the mountains is the same mysterious place – Mount Yanartash. There are many legends about them and you will see the “burning stone” with your own eyes. Flames seem to dance on the mountain’s surface. They appear and disappear, creating a truly mystical sensation. As a souvenir, take wonderful photos that remind you of an unusual trip.

And at the end of your incomparable journey you will visit an unusually beautiful place, a cozy village called Ulupynar. A picturesque, unique place that is so merged with nature that you feel inside and want to fully immerse yourself in the atmosphere of this place. A delicious dinner based on true Turkish tradition awaits you above the rushing river waterfalls. Mountain air, picturesque landscapes, delicious food and sounds of nature create an extraordinary feeling of comfort and relaxation that will make you want to visit this colorful place again and again.

Kemer Olympos Yanartas Jeep Safari from Kemer is a great opportunity to feel a part of the most beautiful nature and the wonder created by it – the Chimera Eternal Fire. Breathtaking landscapes from a bird’s eye view and jeep safari along mountain serpentines and off-road will make you an unforgettable travel experience through the beauties of Kemer province!

Would you like to join another excursion in Kemer? Check out Kemer Demre Myra Kekova Tour.

Your unforgettable jeep ride begins in the town of Kirish. You will be picked up from your hotel at around 3:30 p.m. by a comfortable, air-conditioned bus and taken to the agreed place, where the driver will be waiting for you in a modern jeep. At 16:00 embark on an exciting adventure through ancient historical sites and to the mysterious Yanartash Mountain, one of the famous Taurid Mountains.

The first stop of your journey is the ancient city of Olympos. 1.5 hours you can swim in the azure waters of a truly paradise Mediterranean bay and immerse yourself in history, explore the ruins and ancient artifacts.

Then drive to a unique place in Kemer created by nature – Mount Yanartash. After a short climb along the stone path you will find yourself in this mystical place and tongues of flame rising from the stones will open your eyes. In the evening, the flares of the flame look mesmerizing and you have 1 hour to take magnificent and unforgettable photos against the background of the fire.

Then have dinner at one of the wonderful restaurants above the mountain river in Ulupynar village. After dinner at this beautiful spot, return to your departure point in Kiri’s town, from where the transfer will take you back to your hotel around 10:30 PM.

You will drive through the switchbacks of the Taurus foothills in modern, comfortable and safe Land Rover Defender vehicles, allowing you to travel with the whole family, including your children. The cars are designed for 11-14 passengers and are driven by a professional driver who knows all local highways.

Between bumpy roads and mountainous landscapes, drive to the ancient city of Olympos, which holds many mysteries and mysteries. The city was founded around the 3rd-2nd century B.C. Founded in a gorge at the foot of Mount Takhtali. Olympos was one of the 6 most important cities of the Lycian Union. Their coins were minted in this city.

Olympos existed for about 1000 years. The city was long considered a thriving Mediterranean city, but after the Arab raids and during the Ottoman Empire, it fell into utter devastation. Walking among the ruins, you can see the remains of Roman baths, an amphitheater for 3,000 spectators, Lycian sarcophagi and tombs, as well as the entrance to the temple, which was then considered huge.

You will have 1.5 hours of free time to enjoy the nature of this place and swim in the clear waters of the turquoise Mediterranean Sea. You will feel a reunion with nature and enjoy the wonderful sea air with the aromas of cedar and laurel.

Passing pine groves in big jeeps you will reach the famous “Burning Mountain” – Yanartash (Turkish name). Climbing Mount Chimera (Greek name) will not leave you indifferent. In the evening, the spectacle of the “dancing” tongues of flame is simply fascinating.

Many legends surround the mountain. One of them says that a long time ago from the union of the giant Typhon and the snake woman Echidna, a monster with a lion’s head, a goat’s body and a snake’s tail was born. Flames erupted from the creature’s mouth. Her name was Chimera. She caused many problems, but no one could cope with her. But once Bellerafont made it. Riding the winged Pegasus given to him by Athena, he slew the chimera by jabbing a spear into its throat, and his faithful horse trampled the beast struck in battle to the ground. According to legend, tongues of flame can still be seen at this point.

According to historical evidence, the flames used to be about 2 meters long and served as a kind of beacon for sailors.

Historians suspect that the mountain is linked to the myth of the eternal Olympic flame.

The Lycian stone path leads you to the mountain where you can see this natural wonder. The climb will be 800 meters. Within 1 hour you will take unforgettable pictures of this amazing place and admire the breathtaking view from Mount Yanartash.

In the village of Ulupinar, an incredibly delicious dinner based on Turkish tradition awaits you at a waterfront restaurant.

The Ulupinar River has long been known for finding trout in it. The water in the river is very clean, without any pollutants, otherwise the trout die immediately.

The most atmospheric place with incredible natural energy will leave you with warm memories. You will be seated on soft, comfortable Turkish-style sofas. You will taste various national snacks and salads, as well as juicy chicken or fish dishes. You can also order your favorite drinks.

After a leisurely hearty dinner and immersing yourself in the cozy atmosphere of a rushing river and fresh forest air, having received many magical impressions from this journey, head to the starting point of your amazing adventure – the town of Kirish. From there, a little tired but happy, you will be taken back to your hotel by 11:00 p.m.

How much is Olympos Yanartas Jeep Safari from Kemer?

What is included in the price of Olympos Yanartas Jeep Safari from Kemer?

Can kids participate in Jeep Safari from Kemer to Olympos Yanartas?

How long is Jeep Safari from Kemer to Olympos Chimaera Yanartas? 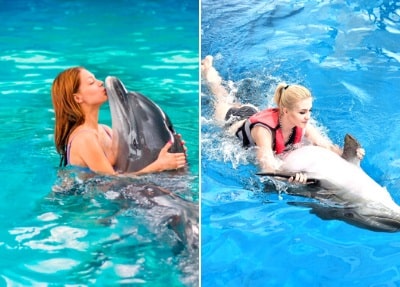