When you book with an account, you will be able to track your payment status, track the confirmation and you can also rate the tour after you finished the tour.
Sign Up
449

Would you like to immerse yourself in the history of ancient civilizations? Delve into the myths of the Ottoman Empire? Visiting three cities in one day? A trip to Kemer Perge Aspendos Side Tour gives you such an opportunity!

A fun journey through the cities of antiquity will delight you with its evocative backdrop and leave a unique touch of mystery.

You must visit three cities in one day, two of which, Perge and Aspendos, are of Greek origin. And the third is a port city in southern Turkey.

The first city on the route will surprise you with its size. Despite the fact that most of Perge is in ruins, it is still an archaeological site and is included in the list of UNESCO sites. There are well-preserved Greek mosaics depicting the sea and jellyfish for you to capture.

The grandiose architecture of the ancient city of Aspendos will surprise you with its grandeur. The largest amphitheater has been preserved on its territory, which can seat up to 17,000 spectators. Feel like a spectator at its antique stalls surrounded by ancient architecture and history.

The beautiful city of Side will not leave you indifferent. Magnificent waterfalls, the columned street, an amphitheater, a museum, the Temple of Apollo and much more can be found on the streets of this city.

Get carried away by a trip to Kemer Perge Aspendos Side Tour and get a chance to see the world from a different angle and collect only the best memories!

Price List for Perge Aspendos Side Tour from Kemer 2022:

Would you like to join another excursion in Kemer? Check out Kemer Demre Myra Kekova Tour.

Your entertaining journey through the ancient cities starts around 8:00 in the morning when a modern car picks you up at the hotel. Your first stop is the city of Perge with its 4th-century Roman gate that welcomes you. Behind it, walk along the main street, you will notice the amphitheater, the ruins of the stadium. You can see the Roman bath complexes called Baths, as well as numerous church ruins.

Then move to the no less mysterious town of Aspendos south of Perge. The city once belonged to the Romans, but then became part of the Byzantine Empire. Most of the city is fairly well preserved, so you can see its buildings from the foundations to the interiors. On the other hand, the Aspendos Amphitheater is the best preserved of all Turkish theaters and you can easily explore its grandiose structure.

Then enjoy a hearty, traditional Turkish-style lunch at a local restaurant before heading to the last city on the list.

Side is one of the most visited ancient cities, which impresses with its architecture and special atmosphere. In the evening around 6:00 p.m. a bus will be waiting for you to take you to the hotel.

The first place along the route is taken by the city of Perge, whose strong military structures have survived to this day. All of Perge consists of solid archaeological ruins and its architecture combines Roman and Hellenistic elements, which attracts many fans of ancient civilizations.

Here you can see the building of the ancient amphitheater, stadium, baths and Hellenistic gates. After wandering the ruins of the amphitheater for 15,000 spectators, you will be amazed by its scale. And the ancient stadium in Perge is considered the largest in Asia Minor. You will also be curious to see the Roman Baths, richly decorated with gold, marble and mosaics. Only the noblest people of that time could afford such baths.

Next, Aspendos awaits you. The exact date of the founding of the city of Aspendos is still unknown. In its rich history, the city has experienced numerous wars, rulership changes and raids. At the beginning of the 13th century, the city was conquered by the nearest foreigners, after which its prosperity gave way to decline.

The Aspendos Ruins Promenade is a rewarding experience for all adventure lovers. On the way you will come across a theater building, where performances were still held until recently. Its endless grandstands can accommodate up to 17,000 people. There is a beautiful gallery with arches above the auditorium. You will be very impressed when you enter the stalls and touch these magnificent artifacts.

During the excursion you don’t have to worry about the food as it is already included and well thought out. After the walk, head to a local restaurant where you will be served a full meal. It consists of grilled chicken or fish, salad with fresh vegetables and rice. You can also buy drinks.

The magnificent city of Side is already 2000 years old since its foundation. However, this did not become a less visited place. It is considered a port city and is located on a peninsula. You will visit its old part and discover many unique buildings in its surroundings. The Temple of Apollo is a visiting card of the ancient city. The huge white pillars are impressive in their size, and the remaining ruins make it clear that an imposing building once stood in their place, much of it destroyed by an earthquake.

Another pleasant part of the trip will be a visit to the nearby Side waterfall. They can be Kurshunlu or Manavgat , at the choice of the organizers and depending on the weather.

Both waterfalls are picturesque and you will definitely like them. Manavgat Waterfall was created by human hands, but that doesn’t make it any less beautiful. It surprises the imagination with its unique shape: 40 meters wide and 2 meters high. Streams of the clearest water rush across the entire area, forming a beautiful turquoise green background.

Kurshunlu Falls is one of the most beautiful waterfalls in the world. This is a real oasis in the forest, which is a multi-level cascade system. Its waters connect seven reservoirs, and the spray of falling rays creates a rainbow that shimmers in the sun.

After the last refreshing moment of visiting the waterfall, your journey ends with the arrival of a comfortable bus around 18:00, which will take you back to the hotel.

What is included in the price of Perge Aspendos Side from Kemer?

How long is the Perge Aspendos and Side from Kemer?

Excursion Perge Aspendos and Side is from 08:30 to 18:00 and lasts approximately 9 hours.

How much is Perge Aspendos Side Tour from Kemer? 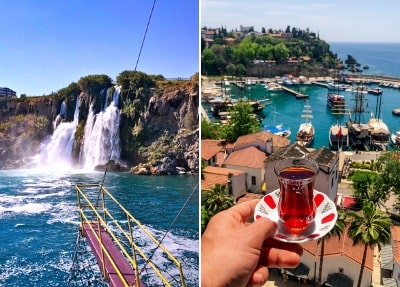 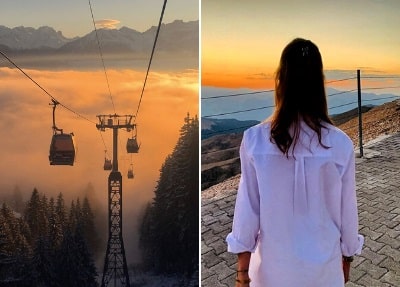