When you book with an account, you will be able to track your payment status, track the confirmation and you can also rate the tour after you finished the tour.
Sign Up
601

Sightseeing Tour of İstanbul from Alanya

Do you dream of visiting a historical and important city in Turkey? Immerse yourself in the local flair and enjoy the outstanding monuments of Istanbul? We invite you to an amazing and exciting “ Istanbul Sightseeing Tour from Alanya ”!

Your bright and informative excursion will begin with a visit to the Sultan Ahmet Mosque, or as it is also known, the Blue Mosque. You will see the world famous and only six minaret mosque. The most expensive types of stone and the rarest marble were used for its construction. The mosque will amaze you with its grandeur and beauty.

You will stroll along Sultan Ahmet Square among ancient monuments such as the “German Fountain”, the “Egyptian Obelisk” and many others that have been carefully preserved to this day. During the reign of the Roman Empire, part of the square was occupied by a hippodrome that could hold around 100,000 people! Imagine the scale and grandeur of this incredible building.

You will travel to Topkapi Palace, a chic and opulent palace complex where many sultans lived. The walls keep many secrets and intrigues, and the beauty of the territory and buildings of the palace will transport you to distant times.

You will visit the Hagia Sophia Mosque. Previously, this building was an Orthodox cathedral and was called Hagia Sophia. In 1985 it was included in the UNESCO World Heritage List . You will see how Christian and Islamic cultures can coexist in one place. Although this cathedral has been converted into a mosque, many magnificent frescoes with icons inside have been preserved.

You will walk through the Egyptian Bazaar, famous for its spices and sweets, and buy souvenirs for you and your loved ones. You will be surrounded by pleasant aromas, delicious sweets and bright colors.

In the evening of the Bosphorus, take a boat trip on a yacht, where you will see the mesmerizing views of Istanbul, chic villas, beautiful palaces, powerful fortresses and towers. You will relax from a busy day.

Istanbul Sightseeing Tour from Alanya will bring you a lot of joy and pleasant memories!

Price List for Sightseeing Tour of Istanbul from Alanya 2022

Every Day – Ask For Times

Would you like to join another excursion in Alanya? Check out Alanya Fire of Anatolia Dance Show Troy.

A comfortable bus will take you to the airport at the specified time. Upon arrival in Istanbul, you will be picked up and your city tour will begin at 7:00 am. You will visit Sultan Ahmet Mosque, Sultan Ahmet Square and have lunch. After lunch, you have free time to walk around Sultan Ahmet Square on your own.

Next, go to Topkapi Palace, Hagia Sophia and the Egyptian Bazaar. You have time to buy spices and sweets. Then take a boat trip on the Bosphorus and lunch. In the evening you will be taken to the airport and around 9:30 pm you will fly back to Alanya. A comfortable bus will be waiting for you at the airport to take you to your hotel.

You will visit the most important mosque in Istanbul – Sultan Ahmet. You will be amazed by its magnificent architecture, amazing light blue tones, graceful graceful lines and chic interior design. The mosque was built by order of Sultan Ahmed I. For him, she was a kind of talisman for successful military campaigns and defense of Turkey’s position. Construction began in 1609 and lasted seven years. Two additional minarets, thanks to which the Sultan Ahmet Mosque is famous all over the world, were built quite by accident.

Then head to the largest Sultanahmet Square. It was named after the mosque of the same name, which is located on its territory. In ancient times, part of the area was occupied by a hippodrome and housed about 100,000 people. Various types of holidays, celebrations and horse races were held there. On the spot where the entrance to the Hippodrome once stood, see the unique German fountain donated to Turkey by Germany in 1898. Many historical monuments and visiting cards of Istanbul will appear before your eyes.

For refreshment, head to a Turkish restaurant to sample hearty chicken with rice, meat patties, fresh vegetable salad, and a selection of snacks. After lunch you have free time to explore the square.

Then you will visit the luxurious Topkapi Palace covering an area of ​​700,000 square meters. Originally, this luxurious palace complex was built for government affairs, but during the reign of Sultan Suleiman, a harem was attached to the palace and transported there, after which all sultans lived in it until the mid-19th century. You will be amazed by the rich decoration of the premises and the large number of preserved antique exhibits.

Then drive to Hagia Sophia Mosque. The former Orthodox Hagia Sophia was converted into a mosque in 2020. You will see carefully preserved reminders of Christian culture alongside Islamic culture. This massive building with powerful energy was completed in 537. You will admire the ancient mosaics and frescoes that adorn the mosque’s ceilings, domes and walls. You will also examine the baptismal font where Princess Olga was baptized and make a wish at the sacred “Column of Wine”.

You will then stroll through the colorful Egyptian Bazaar, which is home to about 80 shops, and enjoy the delightful aromas of spices, spices, oriental sweets and local flavors. The construction of the bazaar started in 1579 and lasted 67 years! It got this name because all the ships with spices and cotton from India went for sale through Egypt. You will have free time to browse the shops and shop for souvenirs.

Boat Trip Along the Bosphorus

Then, embark on a 1.5-hour sea cruise on a yacht along the Bosphorus. You have an incredible view of the mansions, palaces and forts on the two banks of Istanbul. Your attention is drawn to a tiny island in the middle of the strait with the iconic Maiden Tower. You will be enchanted by breathtaking views, sea breezes and a relaxing environment.

After an eventful excursion, you’ll taste a hearty dinner and regain your strength. The evening menu includes: chicken skewers, Turkish cutlets, rice and various snacks. You can buy drinks for an additional fee.

What places will you visit during your Istanbul tour from Alanya?

What is worth taking on a tour of Istanbul from Alanya?

For sightseeing tour of Istanbul from Alanya you need comfortable shoes, water and money for personal expenses. Be sure to check charging for your camera or phone, and bring a portable charger with you. For visiting the mosque and for their convenience, women can take a shawl and cloak to cover their head and shoulders. If you ride in open clothing, the skirt or shorts should also be below the knee.

How much does it cost to tour Istanbul from Alanya?

How long is Istanbul sightseeing tour from Alanya?

Istanbul sightseeing tour from Alanya lasts all day. A comfortable bus will pick you up from your hotel between 00:00 and 02:00 and take you to Antalya Airport. By plane you fly to the city of Istanbul, where your excursion starts at 7:00 am. At the end of the tour, you will drive to Istanbul Airport. The next evening, return to your hotel between 00:30 and 01:00. 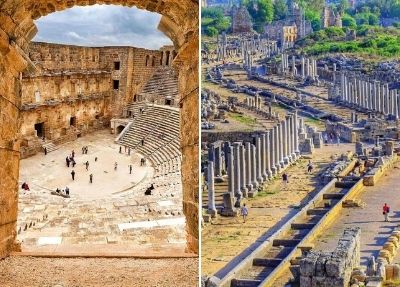