When you book with an account, you will be able to track your payment status, track the confirmation and you can also rate the tour after you finished the tour.
Sign Up
665

You can’t wait to get to know the real Turkey, contemplate the history of the country, walk the centuries-old streets of ancient cities, change the type of recreation from relaxing to cognitive and then the excursion to  Alanya Manavgat Aspendos Side Tour will be according to yours be wishing

A fascinating journey awaits you, an express tour to the most interesting places, a magnificent and fresh Manavgat waterfall, the ancient cities of Aspendos and Side, beautiful natural and urban landscapes, an amazing combination of ancient and modern. You will walk among the ruins of Turkey’s ancient cities, admiring the architectural delights of those times, the grandeur of the buildings erected without special equipment and technical force that mankind possesses today.

Marvel at the fortress and resilience of the structures as you learn the story of their centuries of destruction. You will be amazed by the elegance and taste of the people who lived on the planet thousands of years ago and contemplate the mysteries of the universe. Before your eyes you will see stunning landscapes straight from the pages of bright travel magazines, ancient dilapidated cities covered with a green carpet, walls of buildings supported in places by trees and contrasting modern buildings decorated with juicy colors of the lure life.

This trip will have everything for the pleasure of the eyes: wonderful nature, sun, sea, waterfalls, architectural compositions of ancient cities. You will take hundreds of beautiful photos that will capture the atmosphere of peace and tranquility for years to come.

Price List for Manavgat Aspendos Side Tour from Alanya 2022

Would you like to join another excursion in Alanya? Check out Alanya Demre Myra Kekova Tour.

At 8:30 a.m., a comfortable bus will pick you up at the hotel, where you will embark on a wonderful journey, where the sights will be replaced by bright images. Your cognitive excursion begins at Manavgat Waterfall, an artificial threshold on the river of the same name. The rapid and impetuous flow of the water, the roar of its fall will leave a real impression on you. Sleep after the road lifts like a hand and you are absolutely ready to plunge into Turkey’s distant past.

After the waterfall, drive to the town of Aspendos and visit a really great place, a 17,000-seat amphitheater. The uniqueness of this architectural masterpiece is that the destructive force of nature practically did not touch it, sparing the creation of man. You will be imbued with the spirit of antiquity, touch the benches on which dozens of generations of people in these lands sat, imagine how the stands sang, the audience watched the bloody and merciless fights of gladiators with joy and bated breath . Mentally thank heaven that the days of senseless bloodshed for fun are in the distant past.

After visiting the amphitheater there will be a lunch break, you will refresh yourself and continue exploring the sights of multifaceted Turkey. The road will take you to the city of Side, which is rich in history of creation and destruction. You will see what is left after the human wars, earthquakes and fires that fell on these beautiful lands in ancient times. Walk the streets, take interesting photos and walk back. Sometime around 6.30pm the bus will take you back to the hotel.

The Manavgat waterfall was created in the 80s during the construction of the reservoir, and the emerald waters of the river made it unusually beautiful and endowed with magnetic properties. Today the waterfall is considered to be the most enchanting place in Turkey. Every year thousands of tourists come to admire it, hear the sound of the falling water and catch the myriad sparkling sprays in the air.

The waterfall is not too high, only 2-3 meters, but it is immensely deep. It can only be seen during the dry season when the water level in the river decreases. The width of the rapids is 40 meters, and a huge stream of water flowing evenly over a semicircle will bring you indescribable delight. There is a low forest on both sides of the waterfall, which looks very picturesque.

For your convenience, there are two-level observation decks. Looking down from them you will see glorious turquoise, magical malachite or the beautiful emerald greens of the mountain river Manavgat, depending on the weather. Take as many photos as you can and for sure each one will be great.

The city of Aspendos spans more than two millennia. The town’s residents once built a magnificent river port and, due to its relative safety, turned the small village into an important trading center. The city grew and prospered, beautiful buildings were erected on its territory, the residents were distinguished by hospitality and tried in every possible way to entertain the demanding merchants who stayed in the city. Vineyards and olive trees bore fruit nearby.

Wine and joy flowed everywhere like water. The most famous urban planners were invited to create new buildings and even the architect Zeno was involved in the transformation of Aspendos. He designed and oversaw the construction of an impressive 17,000-seat amphitheater. This amphitheater can safely be called the most unique piece of architecture, having worked for its intended purpose for two millennia. Until 2008, festivals, games and competitions were held on its territory. It was only recently closed after an alternative replacement for the Aspendos Arena was built.

As you look at the amphitheater benches and walk through the arena, you will wonder if humanity is capable today of creating what is destined for almost two thousand years, and if we have lost some superpowers, humans of past epochs. Perhaps conquering time and space, taking a leap in technology and challenging the laws of nature is a payback.

During the tour you need to replenish the lost calories. You will also be offered a hearty lunch consisting of traditional Turkish cuisine, grilled chicken, Turkish creamy rice and fresh vegetables. Drinks can be purchased at an additional cost.

After lunch drive to the magnificent city of Side. The history of this city is full of triumph and tragedy, after having enormous potential, science, art and culture developed. The rulers’ children studied within the walls of educational organizations in Side. It was an honor to live in this city. But, alas, every prosperous piece of land attracts attention, and sooner or later people, driven by the thirst for possessions, come to conquer the wondrous land, destroy it, water its land with blood, trample on flowering gardens , to destroy everything they envied and dreamed of becoming rich.

So it happened with Side, the city could not resist the constant raids of Arabs and pirates and was burned down. Seeing the ashes on the site of a paradise, nature could not bear it, an earthquake occurred, and the stone walls of the city also collapsed. For a long time the land was empty of grief. They say spirits roamed the ashes in search of the past. And only at the end of the 19th century the area was settled again. The settlement has grown and now, alongside the ruins of the old site, a new city is thriving, beckoning with colour, light and life.

In the city of Side you have a great opportunity to go alone and take photos from wonderful angles, feel the energy of this city and see how its stone walls have practically grown into the ground and become one with it.

In the evening you will return to your hotel, bringing with you great impressions and beautiful photos with picturesque views of the ancient cities.

How much is the excursion to Manavgat Aspendos Side from Alanya?

What is included in the price of Excursion to Manavgat Aspendos Side from Alanya?

The cost of excursion to Manavgat, Aspendos, Side from Alanya includes transfer from your hotel and back, insurance, lunch, English-speaking guide.

How long is the trip from Alanya to Manavgat Aspendos Side?

Excursion from Alanya to Manavgat, Aspendos, Side lasts from 8:30 to 18:00. Total tour time is approximately 9.5 hours. 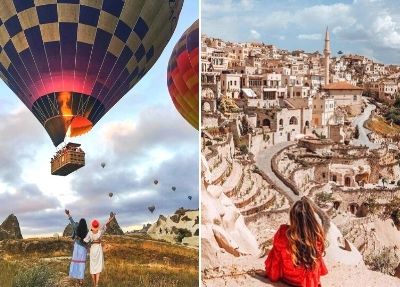 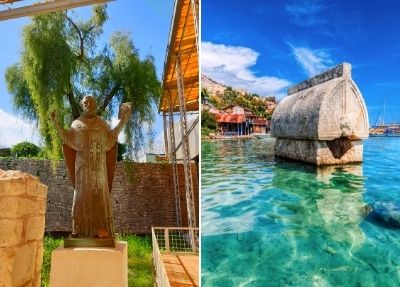